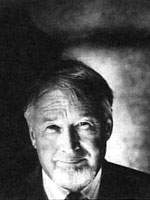 "He seems not only to see but also to say, sometimes tortuously but at the same time quite clearly and incorruptibly, how things are. The world speaks 'indistinctly, fast and about everything all at once,' and Haavikko's solution has been to look at the world face to face and learn its language."—Kai Laitinen, "Introduction to Paavo Haavikko's Poetry" (WLT Vol. 58, Autumn 1984)

Paavo Haavikko (1931-2008) was a Finnish poet and playwright. He published his first collection of poetry in 1951, at the age of twenty. After three more poetry collections, two three-act plays, and two novels, Haavikko's first English-translated piece was published in 1961.

In his Encomium speech, Philip Binham said of the 1984 Neustadt winner, "The Paavo Haavikko who has won the Neustadt International Prize for Literature is a writer at the height of his powers. He has interpreted our myths and our history for us; he has revealed the mainsprings of our actions," (WLT Vol. 58, Autumn, 1984).