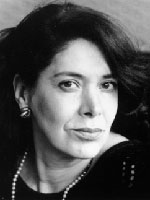 "...we are lauding her here because she has given weeping its words and longing its lyrics."—William Gass, "Encomium for Assia Djebar, 1996 Neustadt Laureate" (WLT Vol. 40, Autumn 1996)

Assia Djebar (b. 1936) is the pen name of Fatima-Zohra Imalayen. She was born in a small coastal town in Algeria, where her father taught French. In 1955, she was the first woman to be accepted into the École Normale Supérieure in Paris, where she published her first novel in 1957. Her pen name originated from this novel, which she feared would anger her father. Her first collection of verse was published in 1969, the same year that she would also publish her first work of drama. In 1978 she became a film director, and her work on La nouba des femmes du Mont Chenoua ("The Mount Chenoua Band of Women") granted her the prestigious Grand Prize at the Venice Film Festival in 1979. In 2005, based on her superior body of work, Djebar was accepted to the Académie française and represents the first elector from the Mahgreb.

In a letter to Djebar, nominating juror Barbara Frischmuth said, "The fact that the language of your childhood, the language in which you feel, shines forth time and again between the lines of your text, not in the form of individual words but rather in the form of perceptions which must first be "translated" or transcribed, opens up an entirely new dimension for French." ("A Letter to Assia Djebar,"WLT Vol. 40, Autumn 1996)