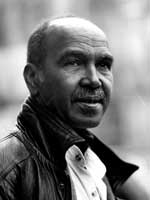 "It is through intertextuality that he extends his literary and philosophical referents to make postcolonial Somali culture part of a cosmopolitan discourse that is a crucial ingredient of what it means to be African in the modern world."—Simon Gikandi, "Nuruddin Farahand Postcolonial Textuality" (WLT Vol. 72, Autumn 1998)

Nuruddin Farah (b. 1945) was born in the Italian-ruled southern region of Somalia, Baidoa. His mother was a traditional storyteller, and his father was a merchant who later worked for the British government as an interpreter. Farah lived in a multilingual environment and learned to speak Somali, Amharic, English, Italian, and Arabic. When he began to write, Farah chose English as the language of his works. His first novel, From A Crooked Rib (1970), depicts the authoritarian role of patriarchy in African society and earned Farah praise as a "male feminist." The publication of his second novel, A Naked Needle (1976), angered the Somalian dictatorial regime and finally forced Farah into exile after receiving death threats. Farah would not return to live in Somalia again, but his lifelong pursuit is to keep his country through his writing.

In his nominating statement to the 1998 Neustadt Jury, Ngũgĩ wa Thiong'o stated, "Nuruddin Farah questions all the oppressive stabilities, whether rooted in the family, the clan, the nation, or in the supranational claims of religion and political systems. He is a Somali writer, an African writer, an important voice in postcolonial modernism."(WLT Vol. 72, Autumn 1998)