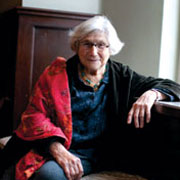 "For Williams, writing begins and ends with being immersed in the human condition, and out of the world springs the text, refined by craft and discipline."—Daniel Simon, WLT March 2010

Vera B. Williams (b. 1927) was born in California, but moved to New York City when she was a young child. It was there that she tailored her love of the arts, studying dance, acting, and painting. She attended Black Mountain Arts College in North Carolina, where she studied graphic arts. Her career as an author/illustrator began in 1975 with her first published illustrations in Remy Charlip's Hooray for Me! Since that first publication, Williams has authored/illustrated more than sixteen books for young children. Alongside her prolific career as a writer and illustrator, Williams has also raised three children, founded a school, run a bakery, made a 500-mile canoe trip on the Yukon River, worked as a community activist, and spent a month in a federal penitentiary as a result of her presence in a women’s peaceful blockade of the Pentagon.

Virginia Euwer Wolff, who nominated Williams for the NSK Prize (and who would win the NSK Prize herself in 2011), noted that "Williams has produced heartening, empathic books for children, each containing some carefully tuned surprise, in word or picture or both. She carries this playful impulse, along with her deeply ingrained social conscience, into her illustrations in watercolor, gouache, marker and colored pencil, and her books are refreshing, energetic and gentle."

In addition to her NSK Award, Williams' books have received many awards. A Chair for My Mother was awarded the Boston Globe-Horn Book Award and the Caldecott Honor in 1983. "More, More, More" Said the Baby (1990) also received a Caldecott Honor in 1991. In 2004, Williams was nominated for the Hans Christian Andersen Illustrator Award.