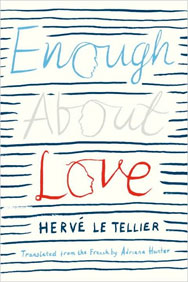 There are many things to like in this smart, droll, finely crafted novel—and not least the sleek narrative symmetries that animate it. There are two married couples here, Louise and Romain, Anna and Stan. Hervé Le Tellier conjures up two lovers, Thomas and Yves, to put those couples dramatically into question. These individuals meet, and sometimes connect, two by two, weaving in and out of each other's lives in closely calculated patterns. Le Tellier stages their meetings with the satisfying ineluctability of theater. He confirms the notion of "play," moreover, when he intimates that he has relied on a game of dominoes to help him structure the intrigue. And not just any game of dominoes, but Abkhazian dominoes, a variant of the common game, played in the near reaches of the Caucasus. As practiced in Tqvarcheli, Pskhu, or Gulripsh, that game deploys as many sets of dominoes as there are players, minus one: any tile put into the chain may be removed and replayed, and the game may last a very, very long time. A perfect recipe, in short, for a novel. So perfect, in fact, that the question of whether that game exists in the phenomenal world or only in an alternative, Borgesian one makes very little difference.

We are put on notice early in this novel that "an attentive reader will always learn more, and more quickly, from good authors than from life." Lest we imagine that Le Tellier makes such a remark in an exclusively self-serving perspective, he peppers his text with allusions to other good authors, principally but not exclusively his colleagues in the Ouvroir de Littérature Potentielle (Oulipo), an effect that brings another consideration to the fore. This is a book about love, certainly, but it is also a book about love stories, and the way in which those stories play out according to their own logic. Watching Hervé Le Tellier conduct that process as he leads his characters in and out of love, one is reminded that literature, too, is an affair of the heart.