Vertical Motion by Can Xue 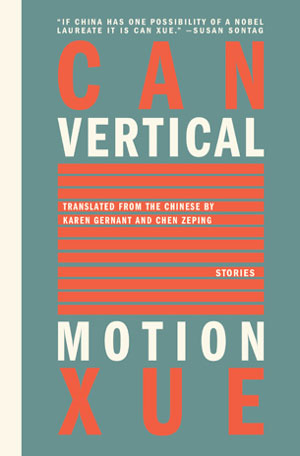 In just a few short years, Open Letter Books, based out of the University of Rochester, has quite impressively staked a claim of literary territory. Not unlike New Directions, Open Letter has made its reputation by finding and publishing some of the best foreign-language writers in the world. Can Xue, the pseudonym of Deng Xiaohua, is the latest writer to contribute to Open Letter's quick ascension.

In her collection Vertical Motion, Can Xue establishes a trippy and surreal world: apartments float high in the air, and large owls and men with lacquer-black skin haunt troubled people. There's a common thread between Can Xue and Japanese writer Haruki Murakami in that both writers use the surreal to expound the oddness of human experiences; but where Murakami's is a kind of hipster existentialism, Can Xue roots her existentialism in folklore. In many ways, Can Xue's place is between Isaac Bashevis Singer and Franz Kafka.

For instance, in "Red Leaves," a story about death and memory, an old man wanders the hallways of a hospital with an old friend, searching for the source of a meowing sound that's been pestering him. The old man's contemplation of whether a leaf turns red from the stalk out or gradually throughout the entire leaf becomes a larger metaphor for mortality. In "An Affectionate Companion's Jottings," a dark and mysterious visitor calls upon a man afflicted with symptoms of manic depression. The lacquer-dark stranger is a symbol for the manic-depressive's melancholia. In "Cotton Candy," a young child becomes obsessed with an old woman's technique for spinning cotton candy, often seeing her at her candy machine when no one else can see her. For Can Xue, reality seems to be unnecessary: it's in fantasy that truth is revealed.

A brief note must be made about the translation. While, for the most part, the translation is solid, there are a few moments where occasional cliché slips through—for example, "come hell or high water" or "when all is said and done." Because the colloquialisms are odd against the language, slipups like these tend to break the dreamlike trance that the author is trying to create.

Minor flaws aside, however, Can Xue's Vertical Motion enhances the reputation that Open Letter has been deservedly earning.

More by Can Xue