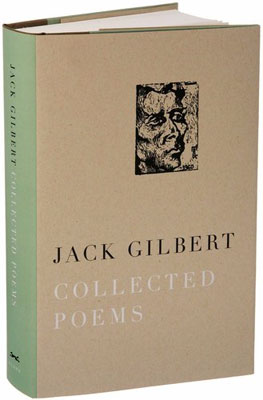 Jack Gilbert’s Collected Poems may be one of the most important collections to appear this decade. Gilbert has an enduring mystique for his contemporaries. Although he once hung out in San Francisco with Allen Ginsberg (he is said to have helped Ginsberg write “Howl”) and has won some of the higher poetic accolades in the American poetry world, he essentially shuns fame and publicity, is affiliated with no university, and has spent much of his life living in seclusion here or abroad. This relative isolation has been instrumental in shaping a poetic style of uncommon lucidity, a voice that speaks directly and with philosophical force.

Gilbert is a juggler of contradictions, delighting in their strangeness the speaker of his poems is continually invigorated rather than daunted by the paradoxes of life; deprivation and loneliness may come but are seen as ultimately fruitful. In “How Much of That Is Left in Me?,” the poet reflects on the productive tension that emerges from the dual states of yearning and celebration, contentment and discontent, concluding, “What fine provender in the want. / What fresh-ness in me amid the loneliness.” He is someone who relishes transitions: he doesn’t fear change but embraces it. In “What to Want,” a man feels the potential for growth in a sudden se-ries of shifts in his life: “The budding / amid the random passion. . . . What interested him / most was who he was about to become.”

Although Gilbert eludes classification, there is an argument for seeing him as a romantic. The women in his life hold a central place in these poems, yet his passion for them and the pain he feels over losing them are never expressed sentimentally. In-stead, they are meditatively revisited, often through metaphors of music or dance, as in “After Love”—“He is watching the music with his eyes closed. / Hearing the piano like a man moving / through the woods thinking by feeling,” or in “Waiting and Finding”: “Meaning love sometimes dying out, / sometimes being taken away. Mean-ing that often he lives / silent in the middle of the world’s music.”

Despite his impulse to savor life’s richness and to bring pleasure and suffering into balance, Gilbert’s speaker is also vigilant, quietly braced by the awareness of mortality, described in one poem as “a cello in-side him.” His speaker watches himself, the foreign landscapes through which he travels, the gestures and moods of beloved women, and the inevitable aging of the body with a cool, mesmerized absorption. In “Meanwhile,” the speaker muses on the constant state of suspension felt between life and death: “For nine years in me it has waited. / My life is pleasant, as usual. My body is a blessing / and my spirit clear. But the waiting does not let up.”