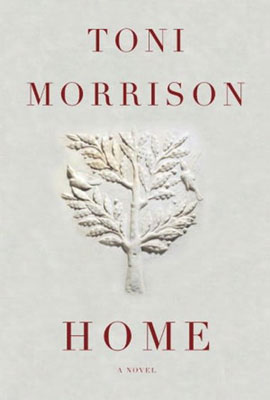 Toni Morrison’s tenth novel, Home, focuses on a Korean War veteran, Frank Money, and his sister Ycindra (Cee) Money, whom he leaves behind in Lotcus, Georgia, to go to war. He has dedicated his life to her protection and well-being. As young children, both witness the aftermath of a deadly game in which local whites kidnap a father and son and demand that they “fight each other to death.” Residents of Lotcus acknowledge, “Some evil . . . was incorrigible, so its demise was best left to the Lord. Others could be mitigated. The point was to know the difference.” Lotcus, like many segregated southern towns during this era, has “no sidewalks or indoor plumbing, just fifty or so houses and two churches, one which churchwomen used for teaching reading and arithmetic.”

Home is a lean and powerful work featuring polished prose in the company of images that linger long after they are read. Frank Money shares, “You don’t know what heat is until you cross the border from Texas to Louisiana in the summer. You can’t come up with words that catch it.”

Additionally, like the novel Beloved (1987; see WLT, Autumn 1988, 658), this work includes italicized, intimate dialogue between characters. Morrison’s linear narrative interruptions are well known and tested. They require readers’ attention and participation to make meaning—as do the stories she shares. Traditional Western storytelling is too obviously simple to capture the complexities of the past histories of African Americans that continue to resonate in the present. Psychic wounds, in Morrison’s cosmology, find relief and voice in psychic dialectic exchanges, much like the artistic license inherent in jazz.

Morrison’s insistence that the past informs the present is very much alive in this work as well. In order to take responsibility for their lives, Frank Money and sister Cee must unravel the mysteries of their pasts. Frank’s memoires of the war paralyze him, and he must come to terms with what happened in Korea to live a productive life. Cee must come to terms with her “mean” stepgrandmother, Miss Lenore, and the often-stifling protection offered by Frank to live a productive life.

Additionally, the reader is plagued with the question of the man in the blue Zoot suit, whom Frank Money first spies on a train in Chicago. And is he the man Cee sees after the interment of the bones of the father who is forced to fight with his son? And how should the reader reconcile Frank Money’s actions in Korea?

In an interview with Charlie Rose for CBS News, Morrison asserts that art is the acquisition of knowledge for clarification of who we are. This work captures the milieu of the 1950s, of the return home of a black man who served in the Korean War, of the strange and often hurtful adages that country black folk can hold onto. Both Frank and his sister firmly establish their personae against great odds.