A Tunisian Tale by Hassouna Mosbahi 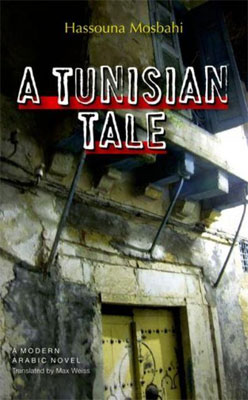 Set on the eve of the Iraq War, A Tunisian Tale reveals a westernized elite that coexists with those in rural villages and urban slums whose inherited systems often stunt lives, ultimately breeding violence. The novel’s structure likewise reflects this central dualism, its Western form containing a traditional Arabic tale narrated by the condemned son. Its conclusion, the latter’s happy ending, contrasts sharply with the dark fates of the novel’s protagonists embedded in the first two chapters.

Alternating first-person monologues compose the narrative structure: the son, Alaa al-Din, stoically awaits execution for his mother’s murder; the mother, Najma, speaks “from beyond the grave.” The linear plot then provides the backstory for their respective situations. Stating, “In our tiny dirt poor village, a young girl . . . had no other choice but to consent to the way things are,” Najma calls her existence a “prison cell.” Alaa al-Din literally inhabits one.

The proud and lovely Najma matures in a village where beauty constitutes “a liability to its possessor.” Choosing a loveless marriage in order to trade her village for the city, she ends in M Slum, an impoverished enclave within westernized Tunis. Resenting her unwanted son, a further constraint, she ignores him. Men spread nasty rumors about her because they can’t have her, women because their men want her. Though initially untrue (she later finds real love in an affair outside the slum), they erode the family’s honor. But once her hapless husband dies defending it, Najma pursues her life beyond M Slum, finally becoming a belly dancer in a fancy hotel.

Born into urban poverty, with a weak but loving father who alone praises his academic promise, Alaa al-Din craves his imperious mother’s love. Blaming Najma for his father’s death, he distances himself from her. The pervasive rumors gnaw at him until he believes his mother is the root of his anger and despair. After unintentionally witnessing her belly-dance performance, which proves to him her decadence, he forms his murder plan.

Like Tunisia itself, mother and son reflect the postcolonial double consciousness. They both love traditional Arabic folktales. Najma reads the Tunis papers, while her more educated son devours both classical and contemporary Arabic literature. Both adore the cinema, though Najma imagines herself the sexy star of an Egyptian film, a dream her belly dancing echoes. Alaa al-Din, meanwhile, favors American genre flicks and fashions his antihero persona from the heroes of Cool Hand Luke and Badlands. Finally, both enjoy the sexual freedom and material pleasures of Europeanized Tunis. Yet tradition sets them on a collision course.

A Tunisian Tale crosses genres. Its clipped, bleak tone evokes a noir, while realism inheres in its portrait of Tunisia and allusions to contemporary political movements, as in Alaa al-Din’s love of Mahmoud Darwish, a nationalist Palestinian poet, and Abu al-Qasim al-Shabi, an anticolonial activist, one of whose poems was adopted during the Arab Spring. Yet it most resembles parable, showing how socially constructed cultural codes can transform society into a Kafkaesque penal colony.