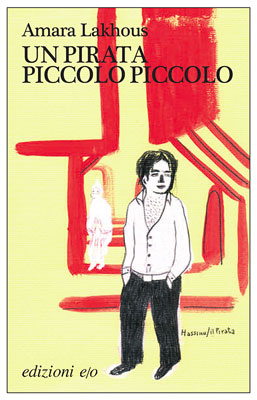 World Literature Today readers have met Algerian-born novelist Amara Lakhous before and may recall the lead character in his wonderfully inventive novel Clash of Civilizations over an Elevator in Piazza Vittoria (2008), who (like the author) is an Algerian exile liberated by life in Rome but beset by recurring nightmares (see WLT, Sept. 2008 and July 2011).

Lakhous is the poet of nightmares, isolation, and stomachaches—all of which he manages to make laugh-out-loud funny. He found his genre, commedia nera (black comedy), with this, his first novel, Un Pirata Piccolo Piccolo (A very small pirate), completed in 1993 when he was all of twenty-three and smuggled out of Algeria in 1995. Written in slangy, raunchy Algerian Arabic, it was translated into Italian in 1999 by the highly capable Francesco Leggio and printed in a small bilingual edition at the author’s expense. This daring, transgressive novel has now been republished, in an Italian-only edition that illuminates not only the origins of the Arab Spring but why Algeria, alone among the Maghreb countries, hasn’t been able to take the kind of united stand against dictatorship the world admired last year in Egypt and Tunisia.

Lakhous delivers the world through monologues. Here there is only one talker throughout, babbling to himself like a child, like a character from a Beckett play, sustained from minute to minute by the forward rush of his words. Lonely, frightened, solipsistic Hassinu is a bachelor nearing middle age. He lives in a tiny remnant of a subdivided Algiers apartment, has worked for the last twenty years as a back-office clerk at the main post office, and lives in dread of AIDS, job loss, and homelessness. He spends each Thursday—a day of rest in Algeria—in the brothel with his favorite prostitute. His only friend and ally in the world is Ferhas, “the bald one,” his chummy name for his penis. Fridays he goes to noon prayer in the over-crowded mosque. “Tutte le mosche sono piene . . . chi vede . . . potrebbe credere che il bene abbia sconfitto il male” (The mosques are all full, you’d think good had triumphed over evil), he mutters, a devastating jibe at a country where by 1993 Islamists had begun killing to further a religious agenda.

Hassinu’s violence—on the other hand—is strictly verbal. There’s a comic tension throughout between his lip service to courteous, pious exchanges with neighbors and colleagues and his inner monologue of heartfelt curses and insults, a favorite being “cimice figli di puttana” (bedbug sons of whores). In the introduction to this canny portrait of a sad sack of a man trying to maintain a scrap of human dignity against tremendous odds, Lakhous notes: “Sotte le dittature i popoli tirano fuori il peggio del peggio di loro stessi, inventando modi patologici di sopravivenza come l’autocensura, l’autorepressione, l’autohumiliazione” (Under a dictatorship people draw the very worst out of themselves, they invent pathological survival mechanisms like self-censorship, self-repression, and self-humiliation). This prescient novel of two decades ago illuminates not only the Arab Spring but its troubled aftermath.