Roadside Picnic by Arkady Strugatsky & Boris Strugatsky, and Zona: A Book About a Film About a Journey to a Room by Geoff Dyer 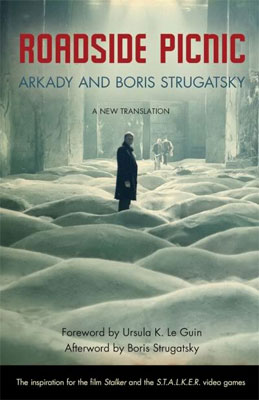 Its lighthearted title notwithstanding, Roadside Picnic (Piknik na obochine, 1972) is a serious inquiry into the consequences for humans of prolonged proximity to the Unknown, with all its marvels, dangers, and ineffability. Arkady and Boris Strugatsky tackle this centuries-old theme via one of the great stories of science fiction: First Contact, the first encounter of humans with entities not of this earth. More often than not, as in this story’s ur-text, H. G. Wells’s The War of the Worlds (1898), the encounter goes badly.

In Roadside Picnic, the aliens have come and gone. No humans knew. Only afterward did they discover six “Zones” where “Visits” took place. To humans, the detritus the visitors left behind is, variously, inscrutable, invaluable, or very dangerous. Regions of each Zone manifest deadly apparent violations of physical law. Some who live near a Zone are inexplicably infected with hitherto unknown genetic or phenotypic mutations. From a nearby cemetery, corpses rise to rejoin their families.

Now, thirteen years later, entry to the Zone near the town of Hartmont is restricted. Those who enter legally are scientists or military. But others sneak in, seeking alien artifacts to feed the thriving black market that has sprung up around the Zone. They are “stalkers.”

The Strugatskys focus on a single stalker, Redrick Schuhart. Red is hardly a conventional sf hero: he is ruthless, insolent, and addicted—to alcohol, nicotine, violence, and, especially, the Zone. Yet he genuinely loves his wife and mutant daughter and incessantly struggles with the rage seething inside him. He hates what the Zone does to people, the betrayals that have become coin of the realm around it, and “the foul scum that had grown on the Zone, gotten rich by the Zone, fed, drank, and fattened from the Zone, and didn’t give a damn.” Red’s adventures and development over the eight-year span of the novel culminate in its tragic and sublimely ambiguous ending.

Even if you’ve read the earlier translation by Antonina W. Bouis (1977), treat yourself to this new one, which is based on the authors’ original text. Olena Bormashenko’s myriad improvements in word choice, punctuation, and phraseology make her rendition more fluent, vivid, and substantive.

When Russian auteur Andrei Tarkovsky adapted Roadside Picnic for his 1979 film Stalker, he dropped all the novel’s personae except Red, whose character he completely changed; threw out all its incidents; changed its themes; and eliminated all alien artifacts from the Zone. The result, Tarkovsky said, has “nothing in common with the novel . . . except for the two words ‘Stalker’ and ‘Zone.’”

In thus transforming a literary, psychological sf novel into a metaphysical cinematic parable, Tarkovsky created the least science-fictional sf film ever, one some viewers find an unwatchable bore and many others (including me) consider an epiphanic masterpiece.

Very little actually happens in Stalker. (Yet, bizarrely, this 161-minute art film spawned three highly popular first-person-shooter video games and a series of Russian pulp novels based on them.) As in his other late-period films, Nostalghia (1983) and The Sacrifice (1986), Tarkovsky evokes meaning through images, facial expressions, dialogue, sound, silence, mise-en-scène, composition—all controlled by meticulous “sculpting in time.” That meaning is personal, different for each viewer, accessible only through imaginative immersion. Stalker must be experienced uninterrupted, in solitude, in darkness.

All of which makes it singularly ill-suited to Geoff Dyer’s approach in Zona. Whatever their ostensible topics, most of Dyer’s books turn out to be about one thing: Geoff Dyer. They are rambling, free-associational, egocentric. When this approach works, it works sublimely. My favorite is Out of Sheer Rage (1997), a painfully funny book about Dyer’s inability to write a book about D. H. Lawrence. In Zona, he uses Stalker as a trigger for personal reminiscences, remarks about other films, and endless further digressions, most of which seem to have little or no connection to Tarkovsky’s film.

At first, these sometimes interesting, often funny asides—many in footnotes, others embedded in the text itself—are mildly amusing. Then they become frustrating. Then infuriating. Their unpredictable, eruptive nature makes it maddeningly hard to focus on whatever Dyer is trying to say about the film.

Zona is not without merit. Dyer writes engagingly. Reading Zona is a pleasant way to spend an afternoon. But if you’re interested in Stalker, watch the film instead, discover it for yourself. In any case, by all means read Roadside Picnic. In the next year or so, Chicago Review Press will publish Bormashenko’s translation of the Strugatskys’ Hard to Be a God (Trudno byt’ bogom, 1964). With luck, these releases will herald a series of new English-language versions of major works by the Strugatskys who, along with Stanisław Lem, were arguably the finest Eastern European sf writers of the twentieth century.