Hard to Be a God and Definitely Maybe: A Manuscript Discovered under Strange Circumstances 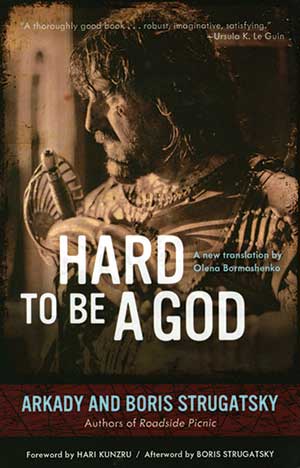 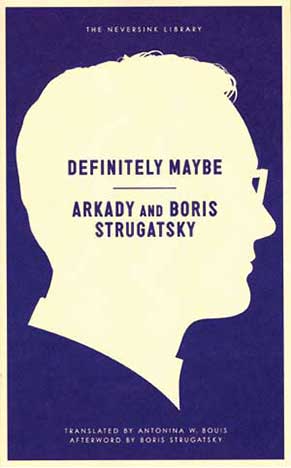 Don Rumata of Estoria is a man of many parts. To the people of Arkanar, he appears to be an aristocrat, a rapscallion, and an “empty-headed ladies’ man.” But this is merely a role. By profession, he is a historian, sent to Arkanar by the future Earth’s Institute of Experimental History to observe the development of its medieval society—but not to interfere. He is also a decent man who increasingly finds the primary dictate of his profession, this “scientifically justified inaction,” in conflict with his moral integrity.

Don Rumata’s struggle takes place against the backdrop of a thrilling adventure story worthy of Alexandre Dumas. Arkanar is “a twilit, ignorant country, mired in a bloody quagmire of avarice and conspiracy.” But it is also a land of gentry, spies, shopkeepers, courtiers, craftsmen, bandits, barons, aristocrats—and a few men of intellect and creativity, who are regularly abused by the fiercely anti-intellectual aristocracy. The trigger event of the novel is a decision by the king to “exterminate all learned men in the kingdom.” As Don Rumata tries to offset this barbarity without compromising his professional responsibilities, events spiral out of control and Arkanar begins an inexorable, escalating slide from feudalism into fascism—a development not predicted by the theory of history to which Don Rumata and his fellow observers adhere.

In addition to its hell-for-leather plot, its underlying philosophical inquiry into the nature of historical change, and Don Rumata’s struggle to retain his humanity amid the escalating chaos, Hard to Be a God fascinates by the richness of the land, society, and people of Arkanar. As in all of their best work, the Strugatsky brothers unveil these details slowly, through incident and conversations between characters. The stature of Hard to Be a God as the richest of their novels—and one of the most popular Russian science-fiction novels—will surely be enhanced by Olena Bormashenko’s nuanced translation, far superior to that of its previous edition.

Compared to the symphonic scale of Hard to Be a God, Definitely Maybe is a chamber piece. There are few characters, no action. Its setting is contemporary, realistic: an apartment house in Leningrad during a suffocatingly hot summer. In his apartment, Dmitri Malianov, a theoretical astrophysicist researching “the interrelations of stars and interstellar matter,” has just made a breakthrough. Suddenly, inexplicably, unrelated interruptions begin to occur, derailing Malianov’s train of thought. Wrong numbers. A delivery from a nearby deli of items Malianov didn’t order. A visit by a lovely young woman, ostensibly a friend of Malianov’s wife; then another, by his neighbor, “the highly mysterious Arnold Pavlovich Snegovoi.” Most alarming, a young man who claims to be from the government’s “Criminal Investigations Department” barges into the apartment and undertakes a Kafkaesque interrogation of Malianov. By now confused, angry, and afraid, Malianov is in no condition to work.

Soon Malianov learns that he is not the only scholar beset by arbitrary, unexpected events that seem intended to impede progress. His bumptious friend Val Weingarten is a biologist who, shortly after his experiments begin to yield “completely unexpected, and even sensational results,” is offered a prestigious administrative position, suffers the death of a close relative, and is instructed to abandon his research forthwith.

This novella consists largely of discussions between Malianov, Weingarten, and a handful of other similarly beleaguered scholars as they speculate about who, or what, might be behind these disruptions, then discuss how to proceed. Like Hard to Be a God, Definitely Maybe offers a serious probe of ethical issues related to the responsibilities of scholars. But what makes it irresistibly engrossing are the richness of the characters, the weirdness and politically metaphorical resonance of their predicament, and the complexity of the philosophical issues each must ultimately confront.

Both Hard to Be a God and Definitely Maybe turn on difficult moral choices. Both end satisfyingly. But neither offers facile answers. Characters must sacrifice to do what they think is right. Both books leave us pondering the essential question posed by the best fiction: in similar circumstances, what would we do?