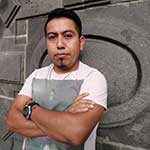 Martín [Jacinto Meza] Tonalmeyotl is a Nahua poet, fiction writer, teacher, translator, radio host, and columnist who has dedicated his career to the anthologization, destigmatization, and greater circulation of underrepresented languages native to Mexico and, more recently, the greater Americas. A trained linguist, his master’s thesis was the first to formally document the morphology and phonology of Atzacoaloya Náhuatl, the variant in which he writes; he has been a professor at various universities in Mexico, at work training a new generation of speakers. He is on the editorial board of Nueva York Poetry Review Press, where he oversees the publication of texts written in indigenous languages. Additionally, he is editor of the series Xochitlájtoli (Círculo de Poesía), a regular column of contemporary poetry written in Mexico’s indigenous languages, and Brasiliana, a series dedicated to those of Latin America more broadly appearing trilingually in the original, Spanish, and Portuguese (Philos). He is compiler of the anthology Xochitlajtoli: Poesía contemporánea en lenguas originarias de México (Círculo de Poesía, 2019), the first to be selected and edited by a member of an indigenous community rather than a scholar from the outside, and the first to include the authors’ own unmediated translations into Spanish. An enormous undertaking including thirty-one authors in sixteen languages, Xochitlajtoli is one of the most significant recent scholarly achievements in hemispheric American poetry. Tonalmeyotl has also compiled an anthology of all female-identified poets writing in Náhuatl as well as a several-hundred-page long, three-volume historical survey of Nahuatl writing. His bilingual collections, which present self-translations from regional Atzacoaloya Náhuatl into Spanish en face alongside the original, include Tlalkatsajtsilistle / Ritual de los olvidados (Jaguar Ediciones, Universidad Intercultural del Estado de Puebla, 2016), Nosentlalilxochitlajtol / Antología personal (Asociación de Escritores de México, Colección Colores Primarios, 2017), and Istitsin ueyeatsintle / Uña mar (Cisnegro, 2019).