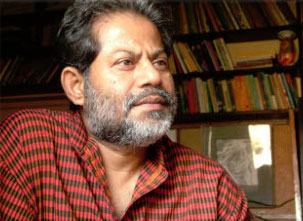 Poets of India, can you walk between two fires?

Translation from the Bengali
By the poet

Author note: A small little village in India, which was a home of birds and swans, has now been turned into a war zone where the poorest of the poor armed with AK-47s are relentlessly fighting the paramilitary forces deployed by the State. Since the advent of British rule in India, villagers have been deprived of the bare necessities, and during the last sixty-three years of independence the poor became poorer and the rich richer—more than 70 percent of the entire population in India has remained under the poverty line. But the ordinary men and women who neither belong to the militancy nor to any political party have been in deeper trouble—when they find the highway that runs through their village is left littered with corpses, even then they have no way to mourn  the dead. A son is taught not to cry openly for his murdered father, a wife cannot claim the body of her husband, for they know it for certain that they will be the next targets. The situation is so inhuman that no political party has any control over it, nor does the rule of law prevail. A primary schoolteacher is shot dead as he is believed to be a communist. His body is thrown out on the road; he is seen with a pencil in his hand, which tells us the story that he was teaching his poor, unfed children even before he was shot. Those who are still alive are both lucky and unfortunate. They are walking between two fires, two infernos. They walk between two check posts—military and militant hide outs. I did not want to write this poem as it pained me for days and nights. A college student of mine who had a family in that village came to me one morning to tell me everything; he couldn’t say a single word, but I found tears rolling down his cheeks. He couldn’t say what he wanted to say, but I feel an eerie sense of guilt, which is reflected in this poem.

Subodh Sarkar was born in 1958 and has published eighteen books of poems. He has participated in a number of international writers’ festivals including the Sun Moon Lake city conference in Taiwan and the New Symposium in Greece organized by IWP, University of Iowa. Recipient of the Bangla Academy Award, he is Associate Professor in English at the City College in Kolkata and guest editor of Indian Literature, the literary journal published by Sahitya Akademi.