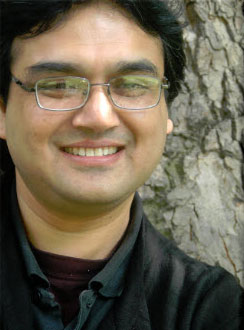 To celebrate the sixtieth anniversary of India’s Republic, the current issue of World Literature Today showcases some of the best cutting-edge modern Indian and Indian diasporic writers who write in English and some of India’s other major languages—Hindi, Urdu, Bengali, Oriya, and Malayalam. The list of authors on display is by no means comprehensive; it is just an introductory show window to the vast array of fine Indian writers and literary practitioners. There are contemporary works here by both established and newer writers, old and young, men and women.

Two poems, in new translation, appear here by the celebrated Urdu poet and lyricist Gulzar, who won the Oscar for the song “Jai Ho” from the recent filmSlumdog Millionaire. There are poems in Hindi by Ashok Vajpeyi, Mangalesh Dabral, and Anamika; as well as others by K. Satchidanandan, Subodh Sarkar, and J. P. Das in Malayalam, Bengali, and Oriya, respectively.

As a special tribute to celebrate the 150th birth anniversary of India’s Nobel Laureate in Literature, Rabindranath Tagore, there is a bonus section online containing an unusual selection of his poetry and poem-songs. There are short poems from Tagore’s book of nonsense verse called Khapcharra, a book that is surprisingly not yet fully translated, and subtle English renderings of a clutch of Tagore’s songs from his vastly varied oeuvre.

Grateful acknowledgments to all the authors who appear in this special issue of World Literature Today for granting permission to publish their work. While the majority of the texts that appear here are unpublished, a few have appeared earlier in the following publications:
Vikram Seth’s in Granta, The Guardian, A Suitable Boy (Orion), From Heaven Lake (Abacus), and The Poems: 1981–1994 (Penguin); Sudeep Sen’s in New Writing 15 (Granta), Language for a New Century(Norton), Prayer Flag (Peepal Tree/Wings Press), and Postmarked India: New and Selected Poems(HarperCollins); Vijay Seshadri’s in the New Yorker; Amit Chaudhuri’s in The Observer and Insomniac(Aark Arts); and Chitra Banerjee Divakaruni’s in Leaving Yuba City (Doubleday).

The Tagore translations will appear in The Essential Tagore, edited by Fakrul Alam and Radha Chakravarty, to be published by Harvard University Press (Cambridge, Mass.) and Visva-Bharati (Santiniketan, India) next year.

Most importantly, thank you to all the authors, translators, and artists for their participation and kind permission to use their work in this important international forum.