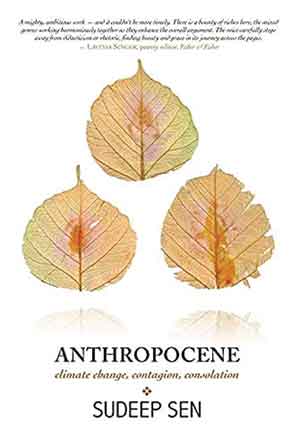 SUDEEP SEN IS a prolific poet, translator, and editor of influential anthologies. His newest work, Anthropocene, marks his engagement with urgent questions about climate change, human survival, and the role of the artist in the age of the Anthropocene. This is a hybrid-genre work that reinvents literary form as an aesthetic response to accommodate unprecedented happenings in history. Sen responds to climate change through the lens of having lived through the Covid-19 pandemic in New Delhi, his hometown.

In the section titled “Anthropocene: Climate Change,” Sen’s poems move from precise observation and documentation of the changes to Delhi’s climate to personal imbrication in these larger phenomena. As the summer heat and pollution levels rise, Sen transports his readers into a state of acute claustrophobia in the poem “Asphyxia,” which echoes several lines from T. S. Eliot’s “The Love Song of J. Alfred Prufrock” and The Waste Land. The “yellow fog” of Eliot’s London morphs into the unbreathable air of Delhi, which “breed[s] calluses in our lungs.” Edmund Spenser’s line used by Eliot in The Waste Land is transformed to “Sweet Yamuna,” and the “song” at the end of the original line is changed to “smog” in Sen’s poem. In “Amaltas,” the beauty of Delhi’s laburnums changes to the yellow of “yolky heat,” which in turn shifts into the “yellow amaltas pyre” in the last line of the poem.

The third section of the volume, “Pandemic: Love in the Time of Corona,” is the most visceral in the depiction of a global crisis that is most intimately experienced by the poet. While “Asthma” documents a personal struggle with breathing, it connects with millions afflicted by Covid pneumonia who are struggling to breathe. In “Love in the Time of Corona,” a poem originally published in the Indian Express, Sen juxtaposes the difficulty of breathing the polluted Delhi air with the catastrophic mismanagement of the Covid crisis in India: the arbitrary imposition of a strict lockdown forcing migrant workers to walk to their villages without food, while the ruling leaders exhorted the gullible populace to “bang plates” to drive out the Corona virus. Although the poem bristles with exasperation at the callous disregard for human life, it still ends with a prayer of hope and healing.

The metaphor of the funeral pyre in “Amaltas” returns in “Burning Ghats, Varanasi,” which evokes images from the second wave of the pandemic in the summer of 2021, when the obscene toll of death created a dearth of firewood, forcing bodies to be dumped into the Ganges River and parking lots to become improvised cremation grounds. The poem begins with meticulous visual details of cremations taking place in the holy city of Varanasi. However, it shifts into a meditation, not on the pandemic, but on the effects of climate change on a river town like Varanasi—the inevitable drowning of some shore temples. The meditation on the cycle of life and afterlife blends with the anxiety produced by the changing climate and topography.

Even though the collection’s aim is to emphasize the enormity of suffering that is already being unleashed by climate change and pestilence, there are a few poems that gesture at healing and comfort still available in ordinary human relationships. After the relentless poems depicting the burning summer of Delhi, poems like “Shiuli / Harisingara” depict the shiuli flower, which blooms in the cooler autumnal season, a flower often used in the worship of Hindu deities, but in this poem the orange petals conjure the human beloved rather than the divine. The flower is symbolic of renewal and comfort at a time of relentless loss.

In this work, Sudeep Sen is not only reflecting on the emerging issue of climate change but also seeking to discover new artistic forms to lend urgency to his voice. There are many examples of traditional forms like the haiku and cinquain. He also invents his own form, which can be described as the “photograph poem,” which juxtaposes powerful photographic images with moving words. The “Skyscapes” series is the most dramatic of these in color. However, including images of the dark pages of the New York Times in the poem “Obituary” adds another layer of meaning to the line “yes they were us.” The final poem in the collection, “Chant,” blends the Tibetan mantra with the poet’s meditation on the chant as a way of centering himself during powerful external convulsions.

Sen’s volume seems in many ways to be responding to Amitav Ghosh’s nonfiction work The Great Derangement: Climate Change and the Unthinkable. Not only does Sen dedicate the poem “Disembodied” to Ghosh, in the last prose piece before the epilogue, Sen confesses that among works on climate change, Ghosh’s work “tops my list for its urgency and intelligence.” Ghosh argued that the modern novel has become unreceptive to accommodating events of global climate change because of the aesthetic demands of verisimilitude. Ghosh considers poetry to be far more responsive as a genre to cataclysmic change and predicts that new genres will evolve to represent realities of this era, simultaneously promoting new conventions of reading. Sen’s hybrid volume seems to be fulfilling this prediction of hybrid and new forms of poetry to create a new lexicon for climate change.