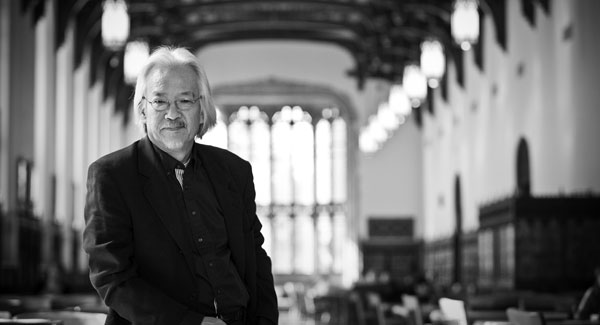 Translator's note: Duo Duo has always insisted that a poet should speak through his poetry instead of through any explanatory prose. Keeping true to this belief, Duo Duo gave a brief yet highly evocative acceptance speech at the Neustadt Prize banquet. In an elliptical, at times almost hermetic language, Duo Duo shed light on his poetics through his own expulsion from contemporary Chinese history and within a universal "all-encompassing story."

Tonight, in front of everyone here, I wish to keep my tone low, so that the word gratitude can be heard more clearly. This is a word that must be said, and should have been said a long time ago.

Upon hearing the verses of Baudelaire, Lorca, Tsvetaeva, and Ehrenburg for the first time, a generation of Chinese poets was already grateful—for the transmission of creativity from hand to hand during those stark years. Words, in the hands of their receivers, had directly become destiny.

Poetry hit us with its power of immediacy, and I believed that from that point of impact, the power would be transmitted back out from us.

Since then, my borders have been only two rows of trees.

Even as I speak, remnants of the 1970s still resound, and contain every echo of the reshaping of one’s character. One country, one voice—the poet expels himself from all that. Thus begins writing, thus begins exile. A position approaches me on its own. I am only one man; I establish myself on that. I am only a man.

I am not speaking about history, but about man, whose appearance in this word history has long been debated. In this word, life is led away by poetry, to search for, as Sylvia Plath said, “a country far away as health.”

I am speaking about writing, that difficult étude.

In the process, what must be spoken meets what cannot be said. Each word is a catalyst, requiring the writer to break out forcefully from another story, from the primitive camp where history, society, and politics converge, to touch upon that “what” and that “who.” At that touch, one finds the unlimited boundaries of man, concealed by words.

At this point, half of each word has been written, the half that can be understood. Grammar is still pondering the other half. Each word is not only a sign. Inside each word there is an orphan’s brain. No words can be younger, but inside the word suffering are all the secrets of being human.

Perhaps pondering words is also a form of seeking justice. If a monologue can invite a chorus, then perhaps it can speak for others as well. Poetry is self-sufficient in its uselessness, and therefore it is contemptuous of power.

At the very least, the ideal of poetry demands this: even as the poet is still catching up, it has already revealed its most dignified aspect. It allows light to be cast on the scales, which light must shine and move upon. Light therefore arrives where man himself can arrive, so as to recognize love anew.

What illuminates us is hesitancy, so action is always condemning; darkness becomes more complete, to the point that it has sealed up all its remaining cracks, without knowing that light in fact originates from within itself. And that is what words must penetrate through.

The present is thereby even more hidden, the hierarchy cannot speak this rule—a spell that has been written down.

When the road has already become an unstressed word, even when tracing its genealogy, what returns are only the echoes of this particular civilization. So we stop here, we stop at the place where we think we can go back and experience the whole journey, on a quest for that word which has been enclosed in ore along with a swooning, ancient past—a sealed-up riddle that is only testing its listener.

In a poet’s listening, at the limits of his honesty, at the ends of logic, a “what” will be opened, that “what”—the present moment. From its deepest roots, a word will burst out from the riddle. Perhaps this word is what has been revealed by hints: an approaching, an encountering, a dialogue.

The road is only in the present, and we use the echoes as milestones.

What I am speaking about is how a poet’s experience is brought into words.

After experiencing the cacophony of revolution, subversion, experimentation, and deconstruction, what can the poet still hear? Inside this word that has burst out from the riddle—silence—is our common condition: on the level of a completely material world, on a human physical level, we are allowing a dysfunctional intelligence to peck at and eat away the landscape; it is a continuation of slogans; a sustainable violence is using memory as fuel, and what has been replenished is the echo of our condition, because the exile of words begins here.

But from the discursive space created by the poetic canon, what constantly echoes is the speech that has never been separated from silence: there is only memory, no forgetting, because there are no mountains, only peaks. . .

The pantheon of classical Chinese poets is emerging, bringing mountain ranges, rivers, weight, and pressure along in their words and between their lines, to be with us not only where language breaks but also at geological fault lines, waiting for us to pick up where they left off—another season in this meadow of life. In another story, in the same allegory, the way we return to the sound of the fresco is the way the light creates our horizon.

At this point, we need the voice of an all-encompassing story to speak.

To speak of East–West, West–East, to speak of this common stage on which we all appear—the earth, the advancing starry skies and dwellings—our allies in writing, our readers—our grasslands under the sea . . .

Nature already has no other water or ink, the danger has been found, poetry has fallen to the periphery, and this periphery comes close to home. Poetry takes this periphery as a blessing and continues to offer rituals for the sick rivers, to offer readable landscapes for the heart.

This is the reason we persevere.

English Translation from the Chinese
By Mai Mang

Mai Mang (Yibing Huang), who nominated Duo Duo for the Neustadt Prize, was born in Changde, Hunan, in 1967 and inherited Tujia ethnic minority blood from his mother. He established himself as a poet in the 1980s and received his BA, MA, and PhD in Chinese literature from Beijing University. Mai Mang moved to the United States in 1993 and earned a second PhD in comparative literature from UCLA. He is the author of two books of poetry, Stone Turtle: Poems 1987–2000 and Approaching Blindness, as well as Contemporary Chinese Literature: From the Cultural Revolution to the Future (2007). Mai Mang is currently Associate Professor of Chinese at Connecticut College. His essay “Duo Duo: Master of Wishful Thinking” appears in the March issue of WLT.

Featuring Chinese poet and 2010 Neustadt Laureate Duo Duo and The Sound of Jazz in Poetry.

“Spit Out What Is in Your Mouth,” Luay Hamza Abbas (Iraq), tr. Yasmeen Hanoosh