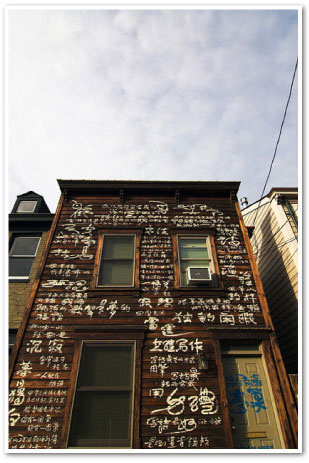 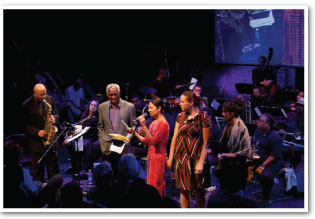 Top: One of the City of Asylum houses in Sampson Way. Photo by David Kent.

Bottom: After Yusef Komunyakaa read "Ode to the Saxophone" (a poem he wrote for Jazz Poetry) in collaboration with the Big Band, each of the poets read a translation of the last verse in their own languages, accompanied by the band. left to right: Oliver Lake (saxophone), Yusef Komunyakaa (U.S.), Khet Mar (Burma), Maryia Martysevich (Belarus), Hinemoana Baker (New Zealand). Photo ©Renee Rosensteel, 2010

Pittsburgh, Pennsylvania, is establishing itself as a site where jazz intersects with art and literature. Section editor Lauren Camp's work is the subject of a solo exhibit, The Fabric of Jazz, March 4–20 at the Society for Contemporary Craft Satellite Gallery, One Mellon Center, Pittsburgh. The exhibit is in honor of Bank of New York Mellon Jazz's silver anniversary and includes nine works from Camp's The Fabric of Jazz: A Tribute to the Genius of American Music.

Later in the year, on September 10, City of Asylum/Pittsburgh will host its fifth annual jazz-poetry event, which brings musicians and poets together in performance. The concert includes poets speaking in their native languages with translations provided on an overhead screen. Some poets who have performed their poetry at the event include Hinemoana Baker (Aotearoa/New Zealand), Horacio Castellanos Moya (El Salvador), Huang Xiang (China), Yusef Komunyakaa (U.S.), Khet Mar (Burma), and Maryia Marysevich (Belarus).

To view video from the 2007 concert:
www.cityofasylumpittsburgh.org

To read a review of the 2010 event:
www.post-gazette.com

Featuring Chinese poet and 2010 Neustadt Laureate Duo Duo and The Sound of Jazz in Poetry.

“Spit Out What Is in Your Mouth,” Luay Hamza Abbas (Iraq), tr. Yasmeen Hanoosh