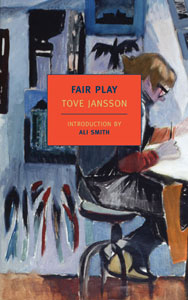 Were it possible to measure novels in decibels, as though the action left some sonic footprint on the world, Tove Jansson's Fair Play would perhaps emit the lowest levels. It is a quiet novel, but unlike most such novels, which proceed at a leisurely pace, Fair Play is a page-turner. Jansson, a Finnish writer and artist who died in 2001, is known principally for her Moomin books, a series for children about a family of furry trolls. Fair Play, a book for adults, was published in 1989 and is now, for the first time, being published in the US. Its premise is simple: through a series of vignettes we look in on the lives of two female artists, Mari and Jonna, who live on opposite sides of an apartment building. They are each other's closest friend, foil, critic, and, in a manner of speaking, love.

We encounter the two women lost in a fog, vacationing, fishing, or simply rearranging photos on a wall. The smaller the moment, the more their relationship is pushed to the forefront of the narrative. Without artifice, Jansson depicts a seemingly magical relationship by how they perceive what is around them and then transform that into something else which reflects back upon their own friendship.

"Jonna had the happy ability to wake up every morning as if to a new life, which stretched before her right through to evening, clean, unspent, rarely shadowed by yesterday's worries or mistakes," the novel begins. We're in the territory of whimsy and play, where adults turn to pursuits more commonly chased by children. Only here, the games are less about recreation than they are conversational methods that enliven humdrum, unavoidable activities that alter lives in the process.

In this world, a random night of movie watching provides the setting for chummy—though reverential—dinner parties, in which "Truffaut, Bergman, Visconti, Renoir, Wilder, and all the other honoured guests" visit with their two new friends for a couple of hours. In one instance, Mari wonders if the duo's cinematic obsessions risk them losing their own identities to someone else's work of art. Jonna opines that the films are tutorials on how to live, and to understand how one's life is being lived. "You mean, maybe they can teach us to piss our lives away with a little more intelligence, a little more elegance?" Mari responds. It's not so much an acidulous response as it is a sly, winking one, a way to acknowledge a given truth with a dash of cynicism, just to keep everything—and everyone—honest.

Jansson excels at these quick, clean moments, and her pared-down style is perfect for capturing the quick back-and-forth of a lived-in relationship. A trip to the American Southwest finds the friends playing detective. The ostensible reason is to combat the staid nightlife of Tucson, but the duo's ruminations on whether their chambermaid is gaslighting them—with fake flowers, no less—adds whimsical drama to a friendship that possesses a powerful interiority. External factors bear little on it. These are friends for whom invention is the key to an ever-evolving affection, a way of protecting that friendship from the effects of time and boredom. The great benefit of reading Fair Play is that one enters into the same arrangement, becoming privy to two lifetimes' worth of shared wonder.