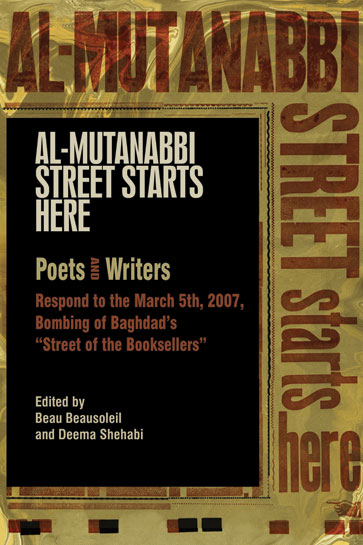 Al-Mutanabbi Street in Baghdad is a winding street about one thousand feet long, noted for its many bookstores and outdoor book stalls. Named after the famous classical Arab poet Abu at-Tayyib al-Mutanabbi (915–965 ce), it has been a thriving center of Baghdad’s bookselling and publishing for many years. On March 5, 2007, a car bomb was exploded on it, perhaps to intimidate intellectuals. More than thirty people were killed, and more than one hundred were wounded—booksellers, book buyers, and devotees of reading and of books—and the Shabandar Café where intellectuals met was gutted. Beau Beausoleil, a poet and San Francisco bookseller, created in solidarity a coalition of poets, artists, writers, printers, booksellers, and readers; broadsides of their writings and artwork about this tragic event were printed, and recitations were made in many cities. With Deema K. Shehabi, another San Francisco poet, an anthology of 135 pieces in prose and verse has now been compiled in this book, including some translated from Arabic and French and the texts of some broadsides (see WLT, May 2012, 34–37).

The pieces are of different lengths and moods. Some describe the street and decry the horrible event, others commemorate the innocent victims, and others still exult defiantly in the eventual triumph of freedom and truth: “You can bomb a bookstore or ban / a book, but it will not die. You cannot kill / a poem like you can a man. / Al-Mutanabbi Street will rise again” (Sam Hamill). “The books blew up and people, / cafés and stores; but words remained, / hovering, circled, waiting” (George Evans).

The anthology begins with an impressive five-page essay by Anthony Shadid, originally published in the Washington Post on March 12, 2007. Born in Oklahoma City in 1968, Shadid died on February 16, 2012, while covering the current Syrian revolution. His essay is a heartfelt story of Mohammed Hayawi, an Iraqi bookseller who died on Al-Mutanabbi Street and whom he knew while he was the Baghdad bureau chief of the newspaper. A similar personal essay is by Maysoon Pachachi, a London-based filmmaker of Iraqi origin, who reminisces about a 2004 visit to Baghdad for the first time in thirty-five years and remembers Al-Mutanabbi Street and Shabandar Café and other experiences. She ends by saying, “And sometimes it seems like the rhythm of Iraqi history is one of destruction, lament, and repair.” In fact, Al-Mutanabbi Street has reopened, and Shabandar Café has been renovated, although its owner lost many family members in the murderous blast.

Among other contributions, there is one by Adrienne Rich (1929–2012) entitled “Tonight No Poetry Will Serve,” another by the Iraqi poet Badr Shakir al-Sayyab (1926–64)—his famous “Rain Song”—and another by Marilyn Hacker entitled “Ghazal: Dar al-Harb,” critical of the United States: “I might wish, like any citizen, to celebrate my country / but millions have reason to fear and hate my country.”

This anthology is recommended, not only for its literary merits, but also for its testimony.