Skip to main content
Home | Magazine | September 2013 | In Every Issue

Not far from 23rd and L, where the hotel Havana Libre, the Yara movie theater, and the popular Coppelia ice cream parlor converge, Eliezer Jiménez’s bookshop offers a vast selection of books to curious passersby, whether tourists or Havana natives.

Dubbed Perroformance (a portmanteau of perro, Spanish for “dog,” and performance), since 1997 the bookshop has been located in a one-hundred-year-old home that mirrors the design of the adjoining dwellings: a porch the width of the façade, sixteen-foot walls, and an interior hallway that traverses the home’s single floor, which is filled with books and magazines on a myriad of Cuban subjects.

Surrounded by thousands of texts organized in boxes stacked from floor to ceiling, Eliezer provides a quick response for almost any request: Cuban classics, Santería, literary and cultural criticism, cinematography, homoerotic literature, anthropology, and more. During business hours—noon till midnight—Eliezer acts as buyer, seller, organizer, and accountant, while carrying on engaging conversations with his clients on topics than range from the human to the divine. With no computer, email, or Internet, Eliezer relies only on the help of a pair of young part-time employees and the company of twelve dogs rescued from neighborhood streets, faithful custodians of his valuable intellectual treasure housed under a name inspired by the dogs themselves.

Unlike other bookstores, Perroformance does not host book signings or readings, it doesn’t publish illustrated brochures, it doesn’t even possess a sign to identify it. On the contrary, its unconventional essence allows those who encounter it to experience an “unbearable lightness of being” among the energies of countless titles and authors’ names crowded against one other.

The enigma dissolves into Eliezer’s voice as he chats with young writers who visit him, like Carlos Velazco and Elizabeth Mirabal, who stop by to leave a copy of their recent book on Guillermo Cabrera Infante or, as he announces to a customer that he’s found in the highest box, the volume of essays Ser cubano (Being Cuban), autographed by Louis A. Pérez Jr. 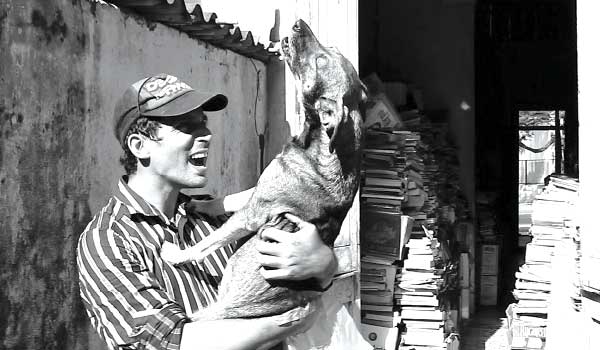 With the unique passion of someone who depends on no one and nothing—including state funding—this young and (some say) eccentric bookseller welcomes everyone with an open heart and a casual simplicity that belie his formal training in history at the University of Havana. Although three classes short of graduating, his humanitarian nature has led him to proclaim that “as long as there is a dog to rescue or a sick person to care for, the academy will take a backseat.”

Difficult to describe with words, Perroformance bookshop speaks better for itself, customer-to-customer, face-to-face. Without access to the virtual world, the door is open to everyone at calle L, no. 308, e/ 19 y 21, Vedado, La Habana, Cuba, a country he not only inhabits but also feels like his own pulse. – Aurelio Francos Lauredo

Editorial note: Perroformance owner Eliezer Jiménez and Nachi sing together outside the bookstore. Nachi is now too old to jump into Jiménez's arms, so he picks her up. When she recently disappeared, Jiménez elicited help from Aurelio Francos Lauredo, who contacted George Henson for help with the fliers. Fortunately, Nachi was found. The store does not have a website, but its telephone number is 011-53-7-832-3709.

Aurelio Francos Lauredo is the author of seven books on Hispanic memory in Cuba.