Complete Plus: The Poems of C. P. Cavafy in English 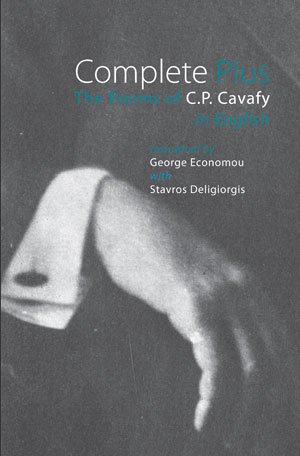 When Plato compared Greeks to frogs around a pond, he probably could not have envisioned the eventual extent of the Greek diaspora. Alexandria, so crucial to preserving and spreading Greek culture, didn’t yet exist. Constantine Cavafy, who lived most of his life there, might just have been able to imagine his poems being translated by a Greek American poet and scholar from Montana. George Economou, with Stavros Deligiorgis, has translated all the poems Cavafy himself considered canonical, plus eight others, arranged chronologically with brief but helpful notes.

The introduction, which culminates decades of thinking about Cavafy, is a worthy companion to the translation. Economou draws on his rich 1981 review essay, “Eros, Memory, and Art,” to illuminate Cavafy’s “unusual degree of overlapping of theme and approach.” “Memory, upon which stories of desire and the art of their telling depend, . . . is his one and only muse.” There are stimulating lists of poems with shared features and exemplary close reading of major poems. In a wonderful discussion of Cavafy’s relations with the love poets of the Greek Anthology, many of whom Economou translated in his 2006 book Acts of Love, he uses lines by Archilochos to show how in “Grey” Cavafy transforms “cruel glee” at a beloved’s loss of beauty into “the image of the beloved and his once beautiful . . . face” as “an object to be preserved against time by memory.” His discussion of “Cavafy’s wide and deep appreciation of the Second Sophistic’s devotion to culture and art” is particularly engaging. The introduction ends with Economou’s illuminating poem “The Newspaper Story,” based on “several unfinished and partially contradictory drafts, variants, and marginalia” by Cavafy.

Economou’s imaginative, energetic translation casts plenty of light on Cavafy’s Greek. The English of the poems he creates from Cavafy’s is so smooth and natural that it is easy to forget that you are reading a translation. But he is aware, as he wrote in the 1981 essay, that translations “never capture what is essential and possible only in one language through one individual and put it on full display in another,” and that the sound and texture of Cavafy’s Greek “has been completely lost from the beginning of any translation venture.” There, he transliterated his favorite Cavafy poem, “According to the Recipes of the Ancient Greco-Syrian Magicians,” to give a slight sense of how much is lost. Now the poems can be heard online at the website of the Cavafy Archive.