So the Path Does Not Die by Pede Hollist 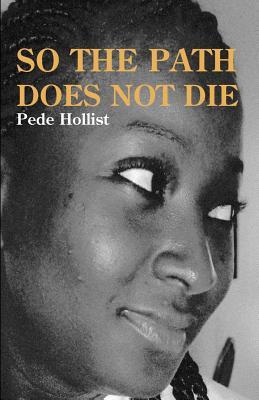 This absorbing novel vividly brings the African diaspora to life. The main character, Finaba, a young woman from rural Sierra Leone, gains an education despite the deck stacked against her and is able to obtain a visa to the United States through NGO workers and a diamond-dealing admirer. In Washington, DC, she lands a series of jobs and rises to enjoy a fashionable, black, international social life. The story begins and ends in Africa and offers memorable characters from the US and Caribbean. From the young girl’s perspective, we discover a world filled with wonder and also unpredictable violence—female circumcision, tribal tension, and war. These test her and affect her deeply, but as in Huck Finn, they lie outside the main story, which is the struggle to survive, find love and strength, and learn to stand on one’s truth.

In Finaba’s case, the idea of truth involves keeping faith. Her name means storyteller, and her grandmother—a traditional leader of women—says Finaba will “show our people the way” forward since they have “strayed from the path.” For a long time, Finaba seems unable to rise to this calling. Her female initiation ritual is ruptured; she and her family are driven from their village; her father dies in the city; she endures beatings in a foster family. At college she endures ethnic slurs and is sexually assaulted by a professor. Traumatized, she fails to graduate. But she is a survivor. Once in the US, she gains a green card, lands jobs, and falls in love with a wealthy, successful young doctor from Trinidad. The war in Sierra Leone draws her back to her native land to seek her grandmother; when this proves impossible, she stays to assist and adopt traumatized female survivors, in essence adopting a grandmother and young girl and opening a new path for them.

The novel is framed with a quotation from the late Chinua Achebe, whose themes of tradition and change prevail; the overall structure is that of a bildungsroman. At times, though, it almost becomes picaresque, and this is a strength—unexpected turns allow the writer to dwell on extremely different settings and give them close-grained treatment. Hollist excels at social interaction, dialogue, clothing, economic detail, and depictions of social gatherings, whether at elite Crowder College or a lavish wedding in Washington, DC. The characterizations and dialogue are strong and often funny: African and African American friends debate the existence of an African “diaspora complex,” and women bond in seeking “BMWs” (Black Males Working). Fresh figures of speech encode the hybrid future of Finaba and her transcultural society. The novel helps keep the path alive and welcomes new readers into this hybrid world in the process of its creation. (Editorial note: On the basis of his short story “Foreign Aid,” Hollist was just shortlisted for the 2013 Caine Prize for African Writing.)