In Times of Fading Light by Eugen Ruge 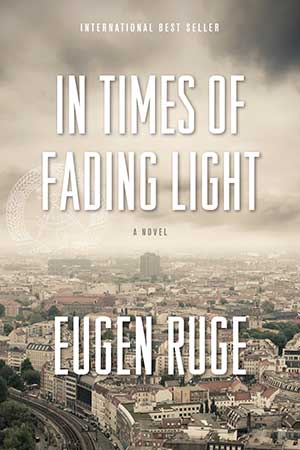 Whatever “light” the utopian vision of communism brought people, it fades under the grinding duress of “real socialism” as it is lived in this Buddenbrooks-like saga of a family’s decline in and beyond the GDR between 1952 and 2001. We start with Wilhelm, an old idealist preparing to celebrate his ninetieth birthday in 1989, who had stood next to Karl Liebknecht at the founding of the German Communist Party in 1919, and his wife, Charlotte, both top bureaucrats in the East German regime.

Charlotte’s son, Kurt, served time in a gulag and was then exiled in Slava, where he marries the native Irina. Khrushchev’s reforms allow them to go to East Germany in 1956. Somewhat in reparation, the party lets him pursue a doctorate in history and produce “approved” histories of the German labor movement.

Their son, Alexander, likewise takes up history, but soon disillusioned with party dogma he gets involved in theater, eventually in West Germany. This discredits his father, whom he accuses of having “lived a lie,” but the father contends, all too familiarly, that he had always striven for “real democratic socialism.” Alexander is diagnosed with untreatable lymphoma, plausibly the result of growing up in an environment that is as toxic inwardly as it is outwardly. His own son, Markus, essentially ends up an aimless dropout.

In 1995 we get a nicely ironic insight into the benefits of unification: Markus’s mother, long divorced from Alexander, has married an East German pastor and local political leader who is now a member of parliament and hence can afford his wife a new Audi (while telling stepson Markus to move out and make it on his own).

One reason Fading Light won the German Book Prize in 2011 is the revelatory prismatic portraits we get of these various family members through one another’s eyes, all in contrast to how they see themselves, as each narrates pivotal years in their lives. Thus we learn, for example, that Wilhelm, the old proletarian, had in fact been in one of the parties that splintered the left in the Weimar era. But that has not prevented the founding myth from thriving, and he gets a party medal every year—because each is expected to be his last. While we do not know what Wilhelm himself believes, we know that Kurt has had his doubts—but in the end his dementia keeps him from having to confront them, reminding us of the collective amnesia that befell the nomenclatura after 1989. These prismatic perspectives thus profoundly deepen our insight into life in the GDR and powerfully illuminate its telling details, making this one of those rare books one is ready to reread immediately.