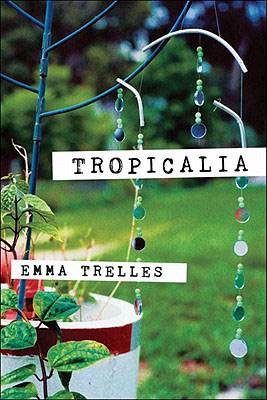 Imagine a market in a tropical city: bright sunshine, intense colors, rhythmic sounds of music and barter, odors of ripe fruit and red flowers. Now, imagine the underbelly of an American city: dark corners, sounds of breaking glass and of punk rock escaping from open windows, odors of rotting garbage and gasoline. Put the two scenes together with affection, honesty, and fearlessness, and you have Emma Trelles's Miami, brought vividly to life in Tropicalia.

The title of the collection, Tropicalia, is borrowed from the politically engaged 1960s Brazilian arts movement of the same name that found expression in music, visual arts, theater, and poetry, and that was particularly influenced by poesia concreta. Trelles brings Tropicaliaback to poetry not with the use of typography but with vivid concrete imagery, such as scenes from "along Penn Avenue, where eyeless cops / brush by on bikes and the homeless knot the corners in rags." Moreover, the poems display a lush and sonorous language; music is not so much evoked as created: "now the shapely hip of a cotton-gagged / cello, now lascivious bass and tambourine shamble." The speaker's affection for the city and an unflinching scrutiny of the afflictions of the city—poverty, drugs, booze, and street life—are honestly represented and, in the poems where affection and affliction are inextricably intertwined, the collection's authentic, nonromanticized, sometimes politically charged perspective is especially powerful.

The fearlessness of Tropicalia is found in a characteristic that some readers might consider a flaw: against the prevailing convention that the "voice" (more properly, perhaps, "style") of the poems in a collection should remain constant throughout, Trelles makes use of at least three distinct voices. It appears that the choice of voice has much to do with the theme or content of the individual poem; for instance, a wonderful poem about escaping the police after a protest with the help of folk-punk musician Billy Bragg combines a narrative form and tone with the mythical suspension of time common to magic realism. The last poem in the book, "Lorca is Green," honors both Lorca's startling, surrealist use of color in poems such as "Romance sonámbulo" and the galloping rhythms of his "Canción del jinete."

Emma Trelles is a poet's poet: comfortable with different styles, adept with imagery, and masterful with sonic elements. Most readers will find something to admire and much to enjoy in this collection.