Mall of the Emirates

We don't use the word "exile" anymore,
despite meeting in the Mall of the Emirates,
that hyperbolic cave, ordering what is expensive
peasant food, while contemplating our prospects
on two or, maybe, three continents,
confessing that we no longer return to our natal countries.
We're unlike our taxi drivers, with our perpetually
renewable visas and self-conscious amnesia,
even if we, too, could forever cruise down Dubai's freeways,
reminiscing on the stupas of Anuradapurna,
how in the sunlight they glint like rice bowls overturned.
In consolation we have what used to be Literature,
its metamorphosis, those phantoms, our other lives.
Or isn't it the other way round? Haven't we been expelled
from the Garden of Nothingness to wander, decade-long,
lost in thought, imagining Al Muteena Street as an avenue in Tunis,
grey palm trees attempting shadow against gilded exhaust haze?
Ali, remember that dream you told me of: Hafiz
appearing to an Australian scholar, nominating him
his Interpreter? That's probably how we ended up here
in this extravaganza of shops, this oasis,
as a poem born on the tip of another's tongue,
as perfectly translatable synonyms for that word: "exile."

Nobody believes me when I say this city
looks like Waikiki, the beaches curving away
under their wall of new hotels and
on the lone bare mountain, where a cryptic
Diamond Head should be, the Moorish hallucination
of a Roman castle. They should: not far
away Wild West towns await a cinematic eye
and south, across the azure Mediterranean,
my doppelgänger stands in a striped galabia,
feet planted on the earth of Djemaa el-Fna,
and, with fado in his heart, he recites
into the ear of an old Goytisolo,
a poem on the lost Caliphate
and on the World-to-Come.

Neither that album page, nor its pristine miniature painting
of a fabled Persian garden where plants bloom with human features,
nor that monochromatic landscape in Coetzee's Age of Iron
under which, as under a bloodied Oriental carpet,
there were the dead faces none of us could avoid stepping on,

this panel of the Altar of the Virgin of the Navigators in the Real Alcazar,
in the chamber from which Queen Isobel despatched the Conquistadors,
she who like the Eternal Mother harboured all behind her chador,
this statement on the Expulsion of the Moors –

Santiago on a white horse, sword raised and poised, ready to swoop;
the heads of the disembodied, their faces stony and sprouting from the ground.

When in the Cathedral at Santiago de Compostela I will be invited
to hug, for good luck, the marble torso of the Saint,
I won't. Not for moral reasons.

Embracing someone from behind like that
reminds me too much of how, in the Apartheid army,
we were taught to approach the enemy,

to slit the throat.

Editorial note: A review of The West and Southern Barbarians will appear in our November 2011 issue. 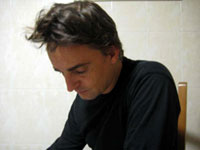 John Mateer was born in South Africa and lives in Australia. He has published several collections, the most recent of which are Ex-White: South African Poems (2009), The West: Australian Poems 1989–2009 (2010), and Southern Barbarians (2011), a volume on the vestiges of the Portuguese empire. To read more about Southern Barbarians, visit http://www.giramondopublishing.com/southern-barbarians. At present he is working on a book of poems about the idea of "the Moor."