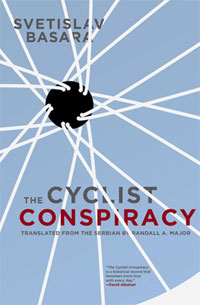 The Cyclist Conspiracy, Svetislav Basara’s second novel to be translated into English (expertly by Randall A. Major), is a dizzying, vertiginous ride in which the real is constantly at loggerheads with the unreal. The reader sifts through what purports to be a collection of apocryphal documents by famous scholars and dubious, not to mention spurious, sources. The result is a perplexing mind game that is, by turns, fantastically intriguing and maddeningly exasperating.

It opens with the memoirs of Charles the Hideous, which reveal the king’s plans to overtake time and his decree that the likes of Sigmund Freud and Arthur Conan Doyle should be born in the future. This leads to one of the former’s case studies and one of the latter’s Sherlock Holmes tales—“The Maniacal Cyclist,” far more fanciful than Doyle’s own story, “The Solitary Cyclist.” Later we come across diagrams, equations, and formulae, the architectural plans of the Hospital of Babylon the Great, plus the poems and prose of one Joseph Kowalsky, a Grand Master of the Little Brothers of the Evangelical Bicyclists of the Rose Cross. This shady, Rosicrucian-esque sect lies at the heart of the novel. We don’t see much of the mystical order’s exploits, but we do learn that they meet up in dreams, that their agenda is “to travel around on bicycles and preach repentance and the imminent destruction of the world,” and that the “unverified” secret list of members includes such luminaries as Woody Allen, Martina Navratilova, and Homer Simpson.

Basara leaves it up to the reader to make sense of his chaos. His many fictive strands either dovetail neatly into others or are left frayed and dangling. His secret society on “velocipedes” or “diabolical two-wheelers” is bizarre but fun, and the idea of their persecution in dreams by a sinister Nazi “Traumeinsatz” unit shows off his unique creativity. Freud is there to analyze those dreams, but when the king, at one point wracked by doubt, says, “It is not to be excluded that all of this is just a dream,” we begin to weary of Basara’s overreliance on smoke and mirrors.

Basara’s other novel in English, Chinese Letter (2004), opens with the protagonist confessing “I have nothing to say” and, later, “It appears that nothing is happening.” In the final analysis, the problem with The Cyclist Conspiracy is that Basara has too much to say and insists on too much happening. His inventiveness is a strength, indeed a talent, but he can’t keep its abundance in check. Sadly, the novel becomes too esoteric for its own good, with those less successful plot strands tying themselves up in knots and the whole thing eventually buckling under the weight of its amassed absurdities.