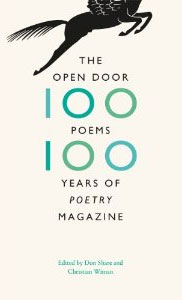 If poets as far-flung as France, Cuba, India, and Nicaragua comprised the avant-garde of literary modernism, a lookout in a turret in Chicago, Illinois, saw the invasion coming to America and, instead of pulling up the drawbridge, simply removed the hinges. In The Open Door: One Hundred Poems, One Hundred Years of Poetry Magazine (due out October 4), the evidence of Harriet Monroe’s prescience as founding editor of Poetry is everywhere apparent. As Helen Carr notes in her essay in the forthcoming volume 2 of The Oxford Critical and Cultural History of Modernist Magazines, Chicago may have been derided by some as “Porkopolis,” but to Monroe and other Chicagoans, its art and architecture rivaled that of any city in the world in the early years of the twentieth century, and Monroe fervently believed in the transformative value of poetry in a globalizing society. A playwright, poet, and journalist, Monroe launched Poetry: A Magazine of Verse in October 2012 with an “Open Door” policy of admissions and a coterie of poet-advisors that famously included Ezra Pound as well as advice from writers like Yeats and Tagore, who visited the magazine’s editorial offices on 543 Cass Street.

Now, one hundred years later, in a new anthology culled from the pages of the oldest monthly devoted to verse in the English-speaking world, Don Share and Christian Wiman—the current senior editor and editor of the magazine, respectively—decided to forego choosing a “greatest hits” collection and instead delved into the more than 300,000 poems that have appeared in the magazine, emerging with a representative centenary selection. There are representative poems by the brightest stars in the Anglo-American poetry constellation (Yeats, Eliot, Stevens, and more), but even more welcome are the little meteoroids of verse by more or less well-known poets like Maria Hummel, Leroi Jones, Donald Justice, Mary Karr, August Kleinzhaler, William Matthews, and Eleanor Wilner. (In the editors’ selection, several decades are relatively neglected, whereas the 1960s and 2000s are generously represented.)

Share and Wiman include a thought-provoking introduction, “Mastery and Mystery: Twenty-One Ways to Read a Century,” in which they meditate on poetry as “a kind of quantum entanglement in language,” reaffirming its ability to “enliven the lives we thought we knew.” Selected quotations from the letters and criticism pages of the magazine—often as provocative as the poems themselves—are also interspersed throughout the collection. In one telling example, Emily Warn invokes the two poles of God and the imagination from Wallace Stevens’s famous 1942 essay, as she calls for “poems that paradoxically make spaces as filled with flux as the world, and as the mind in the world, continually coming into being through a set of relations and then disintegrating.”

If readers would like to sample the genius and diversity of American poetry in the last century, there’s no better place to start than The Open Door.

Editorial Note: Visit the University of Chicago Press website for more information about the book as well as links to places where the book can be purchased.