During the time my father was in the hospital, it made sense to leave the car in the hospital’s underground garage. I would stop at the top of the entrance’s small abyss and let my white Opel slide down the ramp. I’d stop to press the button, pass underneath the bar, and begin to look for a spot. I always found one.

I detested going to the hospital, feigning a serenity that I didn’t have, squeezing into the gigantic elevator boxes, breathing that air which was too clean—ammoniac, unreal, disinfectant—until arriving at the fifth floor. Walking between the beds of sick people as if in a minefield—don’t touch me, don’t let death touch me—and then Hello, dad, how’s everything, everything okay?, you rest. I hated going to the hospital, although I did like descending into the garage and slowly maneuvering my white Opel. Sinking into the asphalt bowels gave me a strange sense of calm. I’d turn on the car’s headlights, and that gray, red, and yellow interior, the symmetry of the walls and columns, became a dependable realm with its safe rules and oneiric silence (do we dream sounds?).

Fortunately, at the end of a few weeks my father improved. So my family and I agreed on daily shifts that allowed everyone to rest. I noticed how much happier we all were, that the hours were going by more quickly. However, I also noticed in myself a certain nostalgia for the hospital’s underground garage. The unspeakableness of this feeling prevented me from varying my routine right away. But the moment arrived when, on the days when I didn’t go, I began to experience a new anxiety that was impossible to fight: the anxiety of the absurd, when you realize that the absurd is real. More and more frequently, I’d go to the hospital on my days off. My family praised endlessly my ability to sacrifice. My father was elated. I felt like a burrowing animal.

They released my father one morning in April. Once at home, his convalescence became more bearable for him and less demanding for everyone. I was so happy to see him around us in such a good mood and so eager to get better, but at the same time something was lacking in me. After a few days of useless resistance, I accepted that I should go back to the parking garage. At first I attempted it with some garages downtown. But I immediately realized that it wasn’t the same: the ramps, the spiral lanes, the stairs were utterly strange to me. I yearned for the hospital’s gray, red, and yellow passageways, where I had learned to feel safe and had come to know them as if I had been their architect.

I parked there whenever I could. As I would get out of the car, a seductive immobility forced me to make an honest effort to keep walking toward the exit and emerge outside. It was almost summer. Soon after, I began to spend a good part of my time in the hospital’s underground parking garage, with the Opel’s seat reclined and the radio on. It was cool down there. Knowing that I was close to sick people helped me remember that I was healthy, that I could leave whenever I wanted.

I wasn’t able to enjoy my dark residence for long. On June 22 I collapsed, and since then I’ve been under observation. The scare hasn’t had consequences, among other things because when that good man found me lying on the ground, the ambulance only had to drive down the ramp then back up to get to the hospital. The worst part of being here is the heat and the uncomfortable mattresses. The care is good. There’s even a nurse whose name, from what I was able to find out, is Rosa, but unfortunately she has an attorney boyfriend who always waits for her in the bar across the street from the hospital.

It’s hotter today than ever, my sheets are drenched. The doctors have assured me that they’ll release me today or tomorrow. My father visits me more than anyone, more affectionate than ever. He comes at breakfast time, leaves after lunch, and sometimes returns for my dinner. Tonight, for example, he’s promised he’ll come. He was so happy. Before he left, he said: I think I’ll come at eight. And it’s no bother, son, don’t worry, it doesn’t take long at all in the car. Besides, I always find a spot in the hospital parking garage. Have you noticed how easy it is to park down there?

This piece is one of WLT's 2012 Pushcart Prize nominations. 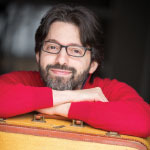 Andrés Neuman (b. 1977, Buenos Aires) is a novelist, short-story writer, poet, essayist, and aphorist. He writes his own blog, Microrréplicas, one of the best literary blogs in Spanish according to a survey by El Cultural. His fourth novel, El viajero del siglo, won the 2009 Alfaguara Prize and the National Critics Prize, awarded by the Spanish Literary Critics Association. The critics of El País and El Mundo included it among the five best novels of the year in the Spanish language. It is available in English as Traveler of the Century.