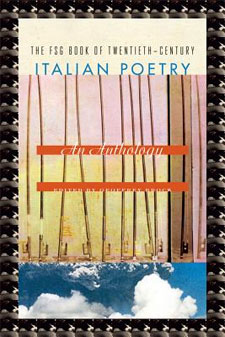 To edit an anthology of modern poetry in translation is no easy task: not only must individual poets and poems from a broad time period be selected, but the editor must also find available translations of enduring quality. Geoffrey Brock resourcefully resolves the challenge in part by doing his own translations of a significant number of poems, a job for which he meets the criteria set in his translator’s note—“translators must also be poets”—by being himself an accomplished translator and poet. He has also assembled an unusually varied group of translators who are themselves practicing poets, including already familiar names—Ezra Pound, Ted Hughes, W. S. Di Piero, and Jonathan Galassi—along with somewhat less familiar ones, such as Susan Stewart, Rina Ferrarelli, and Alan Williamson. Additionally, Brock invigorates the collection by presenting established poets like Pavese, Penna, and Pasolini alongside less-established poets like Alfredo de Palchi or virtually unknown ones like Saturno Montanari. The result is a book with a dazzlingly eclectic sweep, a collection with authoritative artistic breadth and an unusual tonal unity within individual poems.

Brock begins with a thoughtful overview of the tradition of Italian poetry from the medieval period to the present. He offers readers some memorable ways to think about a modern poetic tradition that has been caught in the crosswinds of so many different movements—crepuscularism, futurism, hermeticism, and neorealism, to name a few. Contemporary Italian poetry, he suggests, has been shaped by two major triads—Carducci, Pascoli, and D’Annunzio at the turn of the century, and Saba, Ungaretti, and Montale in the twentieth century. He views contemporary Italian poets as having reacted in contrasting ways to what he calls “the eloquence problem,” the difficulty of emerging from the long shadow of Dante, Petrarch, Ariosto, and Tasso. Although earlier poets like Carducci clung to the traditionally sonorous, elegant language of their literary forbears, later ones, like Saba and Montale, reacted with poems written in a new language that was pointedly earthier and even intentionally harsh. After the postwar period, Brock notes, the pattern of movements began to dissolve, and the long-suppressed voices of women poets like Patrizia Cavalli, Antonia Pozzi, and Alda Merini emerged simultaneously with a revival of poems written in regional dialects.

For readers, the delights of this collection will range from reunions with well-loved poems—Luciano Erba’s vivid portrait of “La Grande Jeanne” (“her world was there, in my hands / and in my teeth that had eaten wild rabbit in the high mountains”), Montale’s “Maybe one morning, walking in dry glass air,” and Ungaretti’s elegy for the enigmatic Mohammed Sceab (“And he couldn’t / free / the song / of his exile”)—to the discoveries of new ones, such as Antonella Anedda’s charming “For My Daughter” or Gabriele Frasca’s musical “Ill-Belated Oar.”

There is the occasional drawback. It is not clear, for instance, why Paul Muldoon’s overly informal rendering of Montale’s “The Eel” represents such an important poem or why the already sparse selection of Rocco Scotellaro’s work does not include stronger poems. But these are minor concerns in a rich anthology that will encourage rereading for years to come.