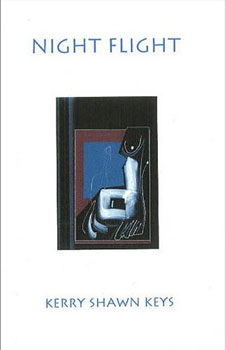 A good many of Kerry Shawn Keys’s poems can be characterized, if not explained, by the lines “Everything’s open to derangement” and “There aren’t any rules for the subjects in this medium.” One of the simplest examples is “The dogwood at the edge / of the park is barking out flowers,” but other poems, like “The Ache,” which opens Night Flight, have more consistently startling imagery.

Many of the other poems celebrate, sometimes with considerable reservations, the power of the female principle and, especially in the first of the book’s two parts, the natural world, rural but hardly pastoral and sometimes sounding like that of Robert Frost—the American woodlands, in particular the birds who inhabit it. In the second half, the world is predominantly urban Vilnius, Lithuania, where Keys has lived for some years. These poems tend to have less wrenched or striking imagery, but they are at least as somber or guarded in their celebration.

Readers who take comfort in paraphrasable sense may prefer part 2, but those more drawn to experiment will find the daring, imaginative flights more appealing. Read word by word, these can seem confusing, but they create an emotional undertone that uses a different kind of syntax. Throughout the volume, poems create a world both entrancing and confusing and reject the lures of pantheism or indeed any kind of theism. Near the end of “The Ache” Keys writes, “at last you understand the majestic indifference of the Promised Land,” though the last line offers “the rising sun.” To put it another way, throughout the collection, biblical and other religious texts offer frameworks for imagery but no solutions, but the end is not illumination but nothingness, for “this dream / of life is a little whiff of the opium / of death opening its womb.”

Yet the overall effect of the book conveys the speaker’s joy in observing and recording. The poem just quoted ends with the central image of the octopus, which cradles and seems to sustain humanity, rocking “in a swish and suspense / Of children about to commence / a journey together into another space, / a spinning, a suction, a balance of grace.”