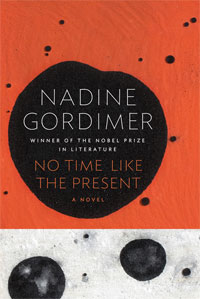 Nadine Gordimer’s latest novel adds to the growing body of literature expressing discontent with the social, economic, and political conditions in post-Apartheid South Africa. In Gordimer’s greatest novels—The Conservationist, Burger’s Daughter, My Son’s Story—she brilliantly combines richly textured topicality (the stifling of dissent in the 1960s, the cataclysmic upheaval of Soweto in 1976, the explosion of resistance in the 1980s) with universal themes of identity, loyalty, betrayal, and the need to find balance between a life dedicated to the self and a life dedicated to the struggle for freedom. This novel’s topical concerns include a dysfunctional educational system, growing xenophobia, emigration, and political misconduct, with frequent references to current president Jacob Zuma’s corruption, cronyism, and trials.

The novel’s main characters, Steve, a white man, and Jabu, a Zulu woman, met as young members of the armed resistance to Apartheid and married once mixed-race marriages were legal. Working respectively as a university professor and a constitutional rights lawyer, Steve and Jabu have negotiated the transition to what the novel calls “normal life” in which “everything is after,” defined in relation to the end of Apartheid. Able now to justify a life in which personal achievement, and not only total commitment to political struggle, is worthwhile, Steve and Jabu raise their two children in a suburb of Johannesburg, mindful in all of their actions of the social conditions of both privilege and its lack. Much of the novel revolves around Steve and Jabu’s decision, seen by some of their friends as disloyal, to immigrate to Australia. The decision to immigrate is, in effect, judgment on the failed aftermath of the Struggle. “What is the difference between not doing anything, and having arrived, while desperately opposing yourself, at recognition that what had been believed, fought for . . . every day degenerates.”

As a great admirer of Gordimer’s fiction and the high standards she sets for her art and her intellect, I am saddened to report that this latest novel disappoints. Gordimer’s fiction typically challenges and rewards with its crisp, taut style, elliptical expressions, and nuanced meditations on moral and ethical dilemmas. Here, however, the style plods, plagued by idiosyncrasies, chief among them a tendency to punctuate questions with periods and statements with question marks, an overreliance on em dashes to fracture sentence structure, and irregular constructions. While such irregularities could conceivably serve the thematic development of the novel, in this case they distract from what is probing and insightful in Gordimer’s disillusionment with the new dispensation in South Africa.