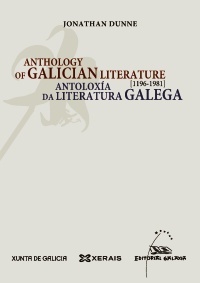 This is the third in a series of bilingual volumes produced by Jonathan Dunne, though we learn this only in his preface, even though the publishers are identical. The first two dealt with earlier periods of Galician literatura, and this one spans right up to the present.

Galician (galego) is a Romance language spoken in the northwest corner of the Iberian peninsula, of which Portuguese is the daughter language; it has been under severe pressure from Castilian. Dunne divides his books on the model of literary history. The first volume deals with the early and most prolific period, which ends at the beginning of the sixteenth century; then come the “Dark Ages,” during which nothing at all of note was written in Galician; in the mid-nineteenth century, there was a revival, which lasted until the civil war, when the language was once again banned. When the dictator Franco died, things gradually came to improve for Galicia and the other “historical regions,” and the language became co-official with Castilian.

This is the stage at which Dunne begins his anthology. He takes sixty works by writers of various generations, which they themselves chose, and arranges the passages selected by the authors in no particular order; the genres are fiction, poetry, drama, and essay. Naturally, the majority fall under the first two headings; he adds children’s and teenage fiction, drama, and essay, but since there are only six examples of the first and three in each of the other two, the distinction seems pointless. It would be invidious to criticize the selection of texts or, indeed, of their authors: Dunne seems, from what he says, to have done a thorough investigation among the writing and critical communities, and the result is exemplary.

It is a different matter when it comes to translation. Of those not done by Dunne, Boland is too free, and omits a few lines (printer’s error?); Moure’s version of Pato seems the best; Pereiro’s self-translation is stilted and literal; while Soto makes a host of errors.

Now to the editor, who translated fifty-six passages. He knows his Galician very well, but still has trouble with his English, in the sense that there are quite a few jarring collocations and a number of register problems: “Ai señor . . . e aínda parece mentira que un home tan grande coma vostede coma tan pouco” (“Dear sir . . . I can hardly believe a man of your stature would be of a mind to eat so frugally”; my italics).

However, all in all Dunne has done a marvelous service to Galician culture with this trilogy: let’s hope it has the desired effect.