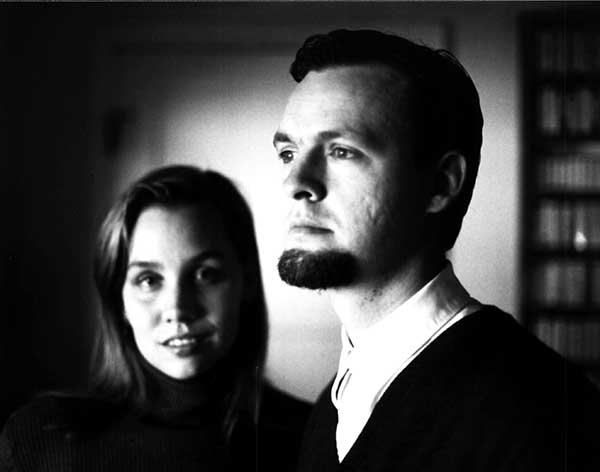 Asplund and Candland helped create Seattle Experimental Opera, a guerilla arts organization formed in the 1990s that disbands and reorganizes like a fluid artistic insurrection. Resource starved, the group compensates with conviction. By always acting as though everything going on is perfectly normal, they foster the sense that unknown conventions are at play. The result are creations akin to opera transported on covered wagons by an underfunded kinship group so far from home that their efforts to re-create their abandoned culture produce fresh conventions.

Take their work Liquid: An Epistolary Opera (2004). A rock band of guitar, bass, and drums supports the work. Midway through the overture they are joined by a wordless singer. Asplund had a singer available on the set of Liquid, so his make-due aesthetic urged him to transform her temporarily into an instrumentalist. Another singer plays piano during the production.

The story unfolds through five letters from Eva Eve, the outer two to Charles and the inner three to Catherine. The opera’s cast of three singers all convey the letters’ contents heterophonically, which is to say simultaneously, thus denying the opera the convention of characters in the ordinary sense. The audience joins the correspondence at an advanced and intimate point. Parsing their meaning is complicated as no replies are conveyed. Eva Eve reveals herself to be a dramatic heroine entangled in a strange love triangle that may include a misshapen duck. The duck’s death prompts the romance to spiral downward. The fresh convention of an epistolary opera prompts the sort of winning confusion that makes chance encounters with worlds of convention so pleasing.

Their next collaboration, Sunset with Pink Pastoral (2006), takes the conventions of a “road movie” to present audiences with likeable innocents abroad amid the vast landscape of the American West. The visual ambition of Candland’s libretto meets the material poverty of experimental opera head-on and without compromise. Milk, the opera’s male protagonist, has a chance encounter with a young Native American and after hearing his prayer exclaims guilelessly, “That’s cool, dude. I wish I had, like, a cultural heritage or whatever.” Such a naïve young man might invite meanness from another composer/writer team courting cruel laughter, but Asplund and Candland treat Milk and everyone else inhabiting their operas gently, effectively cutting themselves off from opera’s traditions of violent emotions.

Their most recent collaboration, Lalage (2011), features Candland’s voice reading from her poetry manipulated and embellished by Asplund’s live, low-tech electronics. They might have called this collaboration an “opera,” too, but they didn’t. “Opera” means something to them, but the conventions informing that meaning belong to them alone.

A WLT contributing editor, Michael Lee is a professor of music (musicology) at the University of Oklahoma.