A Postponed Poem for New York

Before what happened happened,
I mean, before the towers became a stairway to the day
of reckoning, and the world split into two
camps, water and sand,
I used to wish that I’d be among the poets
who would curse New York.

The poem was almost ready in my mind.
To write a poem about the jungle of asphalt and concrete
has become a tradition since Lorca
(inspired by Whitman probably, not Gibran)
had anchored the first rule for the poets
who would aim their pointed poem at the Big Apple,
the sex and money cobra,
the Babylon of our time.

It’s not necessary that poets throw their explosive
cigarette butts in the Hudson’s mud,
or swagger drunk on the cheapest liquor
across Brooklyn bridge, or listen to Jazz howl
in Harlem’s glistening knife-dappled night,
or know that the Statue of Liberty with a flame
that can no longer illuminate a beetle’s wing
was, originally, destined to the Suez Canal
but when the Egyptian state went bankrupt
to the cadence of Aida’s opera
the new rising power, beyond the ocean the Arabs
pessimistically called the Sea of Darkness,
purchased it. And it doesn’t matter
if the poets take the subway with round eyes
that guard their backs, or if they don’t take the subway.
Because he ain’t no poet
who doesn’t try his luck with New York,
to describe it, defame it, threaten it
with a Sodomite destiny, even if he has not seen
cruelty’s dice, the black tears of colored folks,
the muddy feathers of gray pigeons that are good
for anything except as symbol for a peace
that pours from New York’s stony lid.

I’ve never been to America.
I knew it as others do
through movies, dreams, and wars
that gave birth in us – we whose trunks bend
under the weight of its metal ruckus
over the irrigation wheels
of blood and drought –
to two original emotions: love and hate.
And when I once found myself
in the land of maples, I didn’t answer the call
of Ahmad, my brother,
who was constantly snatched by the urging
of gold and dust from the east coast to the west coast
until he ended up fighting for survival
behind the metal bars of a gas station
where his buddy was shot dead with one bullet.
I was afraid that my fleeting passage
through Upper Manhattan
would ruin my ferocious poem that cooks
on my slow fires
of acrimony.

But since what happened happened,
I mean after September 11 in the year of two
false prophets and their satanic verses,
when humankind discovered,
with sudden metaphysical distress,
that our human hands, which we have long trained
to fly in order
to alight us on the face of abundance, these hands,
when the towers exploded, were not wings
but two sledge hammers that plummet
us to the ground. Since then
I’ve been unable to write this poem.
That’s how New York will escape,
for the time being at least,
from another invective poem about its vertical vanity.

That’s a predictable parting blow.
I’d like to suggest
another ending for the poem:
those who flew into the abyss of Resurrection
full of belief that they indeed did possess wings,
if they should ever know
why what happened happened,
think, New York, of the circular time of proverbs,
of blood and heroin dripping from graffiti,
of poisonous mushroom hats on the heads
of a new progeny of statues, of Agent Orange
in mourning dress, of Tomahawk fins
as they leave a child’s eyes
open forever.

Think,
think,
perhaps the letters of those who drowned,
who are dizzy for a tuft of grass and a drop
of water, who are lepers in the womb,
stiff as nails in long lines for a brittle moon,
that so-called loaf of bread,
perhaps their letters are still moaning
in bottles the waves of the two oceans keep
on tossing back and forth.

Translation from the Arabic
By Fady Joudah 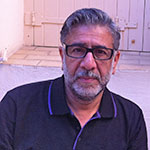 Amjad Nasser (b. 1955, Jordan) is one of the leading figures of his generation writing in Arabic today. He has published nine poetry collections, four lyric travel memoirs, and one novel, Land of No Rain (forthcoming from Bloomsbury Books). He is the cultural editor of the Arabic newspaper Al-Quds Al-Arabi and lives in London. Shepherd of Solitude (2009) is the first selected translation of his poetry in English, and his works have been translated into several languages.

Fady Joudah has three poetry collections and four of poetry in translation from the Arabic. He is the recipient of the Yale Series prize, the Griffin Poetry Prize, and a Guggenheim fellowship.