Diaries of Exile by Yannis Ritsos 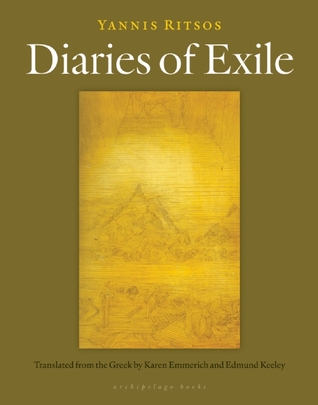 Yannis Ritsos (1909–1990) was one of the most respected twentieth-century Greek poets, “whose writing life is entwined with the contemporary history of his homeland,” as these talented translators of his work, Karen Emmerich and Edmund Keeley, note in the introduction to Diaries of Exile. Ritsos suffered the death of his mother and older brother during his early childhood, survived hard times, including World War I, and fought in the Resistance in World War II against the Germans and as a member of the Greek Communist Party during the Greek civil war (1946–49). In 1948 he was arrested and placed in prison camps for Greek communists during the next four years, both on the island of Limnos and then the “infamous” prison island of Makronisis not far from Athens, where over twenty thousand prisoners were kept.

Emmerich and Keeley have both had memorable careers as translators of modern Greek poets and as specialists in modern Greek culture, and what they offer in this deeply touching book are the “diaries” Ritsos wrote from these desolate prison islands. The translators quote Ritsos in the introduction, explaining how important it was for him to keep writing with his comment, “The only thing I always urged upon myself and my friends was (and is) as much a principle as a method, a form of therapy and salvation: work.”

This impressive collection brings to an international audience the spirit of an enduring poet surviving under the harshest conditions when he seldom had a pencil or a pen and could only write a few lines a day without being punished. Look at the power and simplicity of this sample: “It’s getting dark. / Again we are easily fooled / trading two drams of hope / for five counterfeit stars.”

I had the honor to meet Ritsos personally in the 1980s on the island of Samos, where he had been kept under house arrest by the Greek junta that took power in 1967. I had already by then translated and published in English several of his poems. But to meet the poet in person brought “home” to me that no prison could destroy or extinguish the spirit that Ritsos kept alive through his poetic “diaries” and through the hundreds of pebbles from the beaches of Makronisos, which he had painted over the years, that he had on display in his Samos living room.

Diaries of Exile is a truly memorable book that will have both those familiar with Ritsos’s poetry, and those who are not, wishing for more.