A Marker to Measure Drift by Alexander Maksik 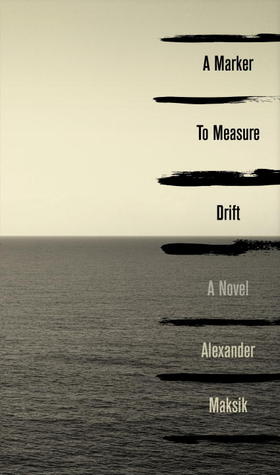 Set against Charles Taylor’s rule of Liberia, Alexander Maksik’s novel transmutes the bloody madness of civil war into the advancing disorientation of Jacqueline, a refugee attempting to find direction in the seaside resort on a Greek isle. Memories arrive unbidden, filling in her sad history and a family she will not recover. Her mother speaks from within her, always in imperatives.

On one level, the novel is simply about how a homeless young woman might go about surviving. Simple declarative sentences, sometimes single words, set the rhythm of her moment-by-moment existence. To eat, to sleep, to void oneself, to walk, and to earn so as to eat again—a necessary routine that leaves little mental space to plan beyond the immediate. The very physical pain of some moments and the reader’s anticipation of worse make for a spaced reading; one repeatedly turns from the novel to breathe.

The spare, even elegant style lifts Jacqueline and her plot from mere naturalism, even while the reader expects circumstances to determine nothing good for her. The history of her family, wealthy and fatefully trusting in Taylor, begins to come more fully in view when Jacqueline visits the ruins of Thera, the ancient town destroyed by a massive volcano that created the tidal wave which supposedly destroyed the Minoan fleet and thus the security of that culture’s base on Crete. The pull of her situation, her history, and ancient history darken any offers of assistance or friendship in her present.

A Marker to Measure Drift does have a problem common to naturalistic novels: a character whose deficits and depletions are such that she has little direction. She drifts, putting her fate in the power of others or in circumstances, going from good or bad luck in a given moment. While one may be fascinated at first and dreading what will ultimately come, since it will come in the moment, there is no mounting suspense to push one to the next page. The climax joins the memory of the past with the situation of the present, a stunning scene set against a subdued psychological release. Her story has been told, but her future is hardly secure.