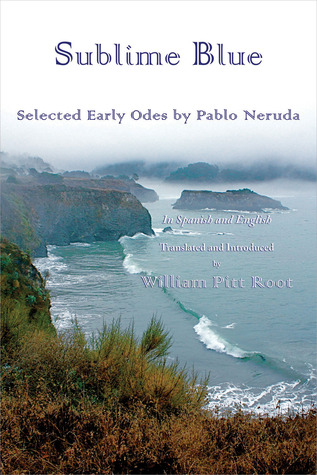 The powerful Odas elementales (1954; Eng. Elemental Odes, 1990) by Nobel laureate Pablo Neruda (1904–1973) are mature poems from the Chilean’s astonishing career. The “early” designation means the Spanish poems are from the first of three volumes of 1954. A few political poems have never been translated until William Pitt Root began wrestling with these deceptively simple lines in the 1980s. Composed to fit newspaper columns, their slender “deception” resides in a dynamic whipping from one realm to another.

Sublime Blue opens with “The Invisible Man,” critiquing unnamed Romantic predecessors while also being self-critical. Midway it shifts since Neruda “cannot / live without life, / be a man without mankind,” unlike “my brother / the poet” who “suffers / because of his passion / for the sea, / he loves exotic ports / for their names, / he writes of oceans / he doesn’t know, / he passes right alongside of life.”

In a brilliant introduction, Root assesses this poem as “the antidote to the ‘I’ as all-devourer and to the private ego as self-reflexive”—artistic poses Neruda “regarded as essentially Romantic, defunct responses inadequate to contemporary existence.” Neruda confesses that he “fought against my own self-absorption and so was able to settle the debate between the real and the subjective deep within myself.” Genuine humility shines forth, but the light of a truthful poet “is dangerous to a capitalism on its last legs.” Neruda was dangerous to the Chilean elite, giving the poor real hope. In “Ode to Poverty,” he knows “the bankrupt wit, the torn suit, / the shoes split wide open,” yet not romanticizing it as “stalking me / through the streets / ever since I was born.” Poverty followed “through barracks and hospitals, through peace and war.”

“A complete poet is a complete human being—not a specialist, a technician       comprehensible chiefly to fellow technicians—who works as the universe itself works,” says Root, “building out of elemental materials those increasingly profound structures in which may live and breathe the astonishing and mysterious varieties of the human spirit.”

Pablo Neruda is that poet, and these poems complete our human song. This great world poet has been speaking truth to power for a least three generations unto this very day because translators like William Pitt Root have understood and lucidly brought these humane poems of fraternal love into countless languages.