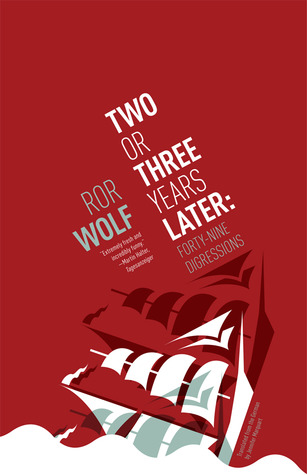 Open Letter Books takes chances with German writers, and for this we should be thankful. Last September, it released Benjamin Stein’s intertwining dual-narrative The Canvas, a reading experience that literally requires turning the book around and upside down. This year, the publishers continue the experimentation with Two or Three Years Later: Forty-Nine Digressions, a surrealist collection from Ror Wolf.

Among his vocations, Wolf is a collagist and poet; the two crafts inform this spare assemblage perfectly. Thick with mystery, Two or Three Years Later is divided into two parts: the first half consists of forty-eight vignettes no longer than a few pages, some as short as a single paragraph. These sketches are ambiguous, comical, and often grotesque peeks at the lives of amorphous German men. Death occurs often. The second half—the forty-ninth digression—is a twelve-part chronicle of the narrator’s dreamlike journey around the world.

Wolf’s book is fast, sometimes outrageous, and always surreal. The short stories in the first half don’t track smoothly, but rather sputter along. The tales cough, stop, reverse, and start again. The style is refreshingly unique but can be wearisome. There are no solid characters or narratives onto which we can grab.

A typical story begins with a diversion and then mixes in a series of distractions and sleight of hand before ending with a tease. “At the Barbershop,” for example, begins with a man committing a murder, “but that’s not the story I wanted to tell,” the narrator says with a sidestep. Other incidents are then recalled before the report ends abruptly: “However, such events are extremely rare, so it’s not entirely necessary to go too far into the details.” (This review is three times longer than “At the Barbershop.”)

Throughout Two or Three Years Later, one has the feeling that Wolf is merely a casual eyewitness reporting on-the-ground events, as in the case with “An Instance of Deep Contentment”: “On Tuesday night, a stranger opened the front door of the Kolb Pub in Worms, stepped up to the bar, ordered a beer and downed it in a single swig, then closed his eyes and gave off an overall impression of deep contentment.” This vignette is not only complete, it is chaste. Much of Wolf’s work is surreal, monstrous, and startling. A character in another tale toys with “the idea of shooting a bullet into his body, through his urethra,” to give one lucid example.

My mind tended to wander, until I reached the dreamlike “49th Digression: Twelve Chapters from an Exposed Life.” Here, at last, we follow a singular character through his nightmarish global travels. The closing chapters are more linear and descriptive but remain completely mad. The entire journey through one part of Africa “was like a creeping fever, a mucous congestion, and after all this creeping I was nothing more than the slimy discharge of my own head,” recalls the storyteller.

Grasping for deeper meaning, I assigned various metaphors to the narrator, for instance Time and Death. In doing so, the forty-ninth digression transforms from absurdity to profundity.

Throughout Two or Three Years Later, the author skips across scenes and events like a stone across calm but dark waters. I yearned for Wolf to pause occasionally, to throw me further into his deeply disturbing rabbit hole. As one story concludes, “But there was something more I wanted to say. If only I knew what.”