The Place We Live: A Retrospective Selection of Photographs, 1964–2009 by Robert Adams 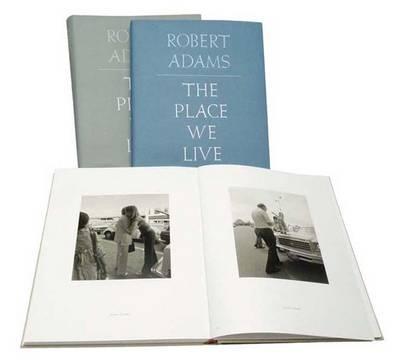 The explosion of digital imaging and social media in recent years has forever altered photography as we knew it. The endless exposure to imagery that is disseminated across social media sites has seemingly replaced iconic images like Dorothea Lange’s Migrant Mother. The most mundane event is documented and shared; the result is the inevitable dismissal of importance once attributed to a photograph. Despite this broad generalization, the photograph still has the power to stun us and capture our attention.

Such is the case with Robert Adams’s traveling retrospective exhibition organized by Yale University Art Gallery and represented in the three-volume catalog The Place We Live, which covers the period from 1964 to 2009. Adams’s black-and-white images are at once sublime and uneventful. His document of the American landscape is not the grandeur of Ansel Adams (no relationship) but a carefully considered portrait of our daily surroundings presented in a manner that gradually leaves us more breathless than the magnificent photographs of Ansel. Robert approaches his subjects with a simplicity and formality that belies the complexity of visual cognition that frame his work. He exploits the image to inform us about the presence of humanity and the delicate balance that mankind shares with nature.

The character of his images is accurately revealed in this catalog and covers a lifetime of image-making from Colorado and beyond. The first and second volumes portray the explorations that are revealed in many of his projects and their resulting books; the exhibit, just as the catalog reinforces, is sequenced according to the project presented. Each reproduction maintains the elegance of the original museum experience by carefully isolating the image from its immediate surroundings while simultaneously retaining its connection to the pieces selected to represent a project. The decision to place the texts at the end of the book allows readers to consult additional resources without interfering with the photographs themselves. Adams’s images are lyrical and poetic, portraying the qualities that light (or dark) reveal. Extreme care has gone into the editing and production of this work, including numerous cross-country travels to carry the proof sheets to Adams for final approval. The results are memorable. The third volume offers the reader an overview of each of the projects Adams has produced as a book represented by the cover design and several page spreads accompanying.

The Place We Live confirms not only the significance of Robert Adams’s contributions to photographic art but, more importantly, his singular commitment to his own vision. It is, like the exhibition it stems from, a confirmation that in the right hands, photography remains a powerful medium.