The essence of photography is writing with light. It is the visual language that we use daily and increasingly communicate with. Millions of photographs appear everyday in newspapers, magazines, books, catalogs, passports, movies, billboards, and the Internet. Whereas photography initially set out to capture and to collect, today it seeks to discover and to publish.

Since the genesis of photography in the 1830s, the medium has gone through extensive technological advances; what was only available to the few is now enjoyed by the masses. However, the biggest challenge photography faced, when compared to painting, was the question, But is it art? The general public as well as intellectuals aggressively attempted to deny photography a place in the arts. Even though he was famously photographed by Brassaï, Picasso said, “I have discovered photography. Now I can kill myself. I have nothing else to learn.” And now this language is facing another challenge—whether digital imaging is an art.

Many writers and poets have written about photography or collaborated with photographers on a subject or a theme. “A good snapshot,” remarked Eudora Welty, “keeps a moment from running away.” In On Photography, Susan Sontag reminds us that “to photograph people is to violate them, by seeing them as they never see themselves, by having knowledge of them that they can never have; it turns people into objects that can be symbolically possessed. Just as a camera is a sublimation of the gun, to photograph someone is a subliminal murder—a soft murder, appropriate to a sad, frightened time.”

As you leaf through this special issue of World Literature Today, I hope you enjoy the galleries that I have chosen from the world of professional photography. Here we see the sublime images and messages of David Goldblatt and Nadine Gordimer, shedding light on apartheid. We encounter the images of Phil Borges as an activist for indigenous tribes, and Robert Glenn Ketchum as an activist for the environment. We go into the deep oceans with David Doubilet but soar high on the dancing stage with Lois Greenfield.

We witness cultures with Graciela Iturbide and Shahidul Alam, war zones with Ami Vitale, and slavery with Lisa Kristine. While Jay Dusard shows us the vanishing lives of cowboys, Camille Seaman shows us the effects of melting icebergs. Ken Duncan stretches his panoramic images with power, while Lalla Essaydi reverses the Orientalist gaze. We immerse ourselves in the surrealism of Joyce Tenneson, the dreams of Angela Bacon-Kidwell, and the spiritual places of Kenro Izu, then enter the grandeur of Candia Höfer’s architecture, the fine art of Misha Gordin, and the images within images of Tim Mantoani.

This is the silent language of photography, with endless alphabets, moments, and style. Without it, our lives would be strangely empty. Here we only hunt and touch with our eyes. 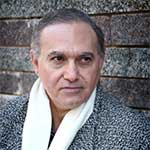 An award-winning Palestinian author, Yousef Khanfar has published three books, is featured globally in many publications, and is listed as one of the world’s top photographers. He has received appreciation from the White House, US Supreme Court, the UK’s House of Lords, and beyond. The Fulbright Center for Peace in Washington, DC, selected his book to help celebrate the Global Symposium of Peaceful Nations. He was selected as Artist of the Year to promote literacy with UNICEF, and the Palestine mission to the United Nations honored him for “appreciation of his extraordinary service to promoting peace and justice in Palestine through art.”