Žydrūnas Drungilas’s first book, Kita stotelė (Next stop), is a collection of texts in various genres, some verging on science fiction, some with recurring characters, subtitled “an explosive mix of absurdity.” 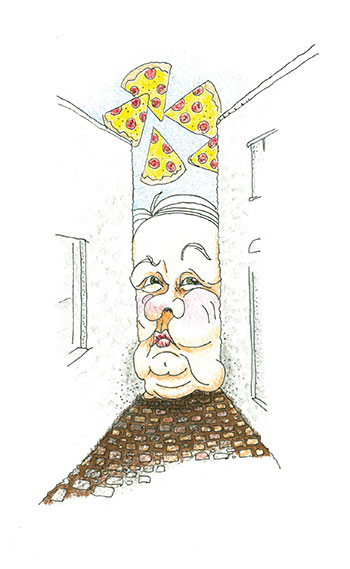 I was late. I hurried, and, still half asleep, I kept tripping on the sidewalk’s protruding cobblestones. When I was quite close to my objective, just about there, already dreaming of diving into the dog and the plow poses, just about curling into the sun salutation, I nearly crashed into a face at the end of the narrow, crooked little street. A huge face loomed over me, wedged between the walls of the buildings. It gazed at me with indifferent eyes. The pink cheeks were pressed in from both sides, the lips looked as if they were pressed together for a kiss, and the fat chin was comfortably set on the ground. I couldn’t think of what to do. Approaching closer, I leaned over to see if there wasn’t a gap somewhere that I could get through, but there was no gap. Climbing over a face like that didn’t seem possible, either. I tried giving it a shove forward. Disgruntled, it muttered something and smacked its lips.

“Excuse me, but I’m in a hurry, good morning, hello, could you move, please?” I rattled on. “Please let me by!”

Silence. Suddenly I realized that it probably couldn’t hear anything since its ears were pressed in by the buildings’ walls. There was nothing left to do but make a circling motion with my finger at my head and turn back to find a street around it, but I saw the condo association’s president approaching. She was walking along without hurrying and didn’t appear to be worried about anything.

Looking at the face, the association president instantly understood how matters stood. “Did you try kicking the nostrils?” she said in the tone of an expert. “Poking a stick in the nose? Biting the lips? These measures are usually effective.”

“Besides,” she pointed at the cobblestone street, “you could throw a handful of gravel in its eyes. That would work. I speak from experience.”

She really did seem experienced in these matters, and it didn’t look like she was joking. I liked her confident tone and professional expertise. However, I did not find these feats inspiring.

“Unfortunately, I don’t have the experience. That’s why I didn’t know what to do. No doubt I’d look like a fool.” I shrugged my shoulders. “I’ll try next time, thanks for the advice.”

I turned to go, but she was in no hurry to retreat. Stopping me, she asked, “Are you afraid? You’re intimidated by large obstacles?”

I turned back. “No, not a bit. I just don’t want to mess with it,” I said. “I let things go on their way without sticking my nose in.”

But she was uncompromising. “Maybe we’d overthrow that face with our combined efforts, huh?”

I turned red. “I have no intention of wrestling with that damn face! I’m in a hurry,” I retorted. Turning around, I started walking back when I heard the association president catching up with me.

“Wait,” she grabbed me by the lapel of my raincoat. “Are you by any chance from building nineteen, apartment seventeen?”

I understood this was going to take a bit. “You know what?” I said, “I can help you find a stick, there’s some bushes growing not too far from here.”

Holding my lapel with one hand, with the other she grabbed my family jewels and turned counterclockwise. “You didn’t answer the question.”

I inhaled and was prepared to howl in an ungodly voice, but I saw some people coming down the street. “I’m just renting,” I wheezed. “Sometimes I stay with friends, I travel a lot. I don’t understand, what is it you want?”

I looked at her, stunned and confused. Four passersby approached. “That face,” I screamed at them, “it’s blocking the way. This woman knows what to do!”

The passersby started discussing among themselves what to do with the face. The association president let up a bit and pushed me toward the wall, but she didn’t let go. I felt her firm hand and determination, and I realized that she was preparing for something important. More people arrived. The racket muffled the association president’s voice. Letting me go, she poked her finger in my chest and shouted: “It’s him! That face is his work! He’s to blame for the face!”

The passersby surrounded us. Some of them had long umbrellas. Cowering, I expected the worst, but I heard a loud cough and then a plop. It was the face. Turning around, everyone saw a huge chewed and drooled-over piece of pizza. The face smacked its lips and cleaned its teeth with its tongue. People rushed at the face with umbrellas and briefcases; the association president, leaving me alone, pulled out a canister of pepper spray.

The crowd stayed to scare off that mess of a face, and I slinked back along the wall. I don’t know why people should be hindered that way. I thought about the scorpion pose.

Translation from the Lithuanian
By Elizabeth Novickas

Žydrūnas Drungilas did his graduate studies at Klaipeda University in Lithuania and the University of Illinois at Chicago. He is currently editor of the weekly cultural journal Šiaurės Atėnai in Vilnius, Lithuania. Between rare but memorable visits to literary salons, he has been seen wandering the streets of Vilnius in a state best described as inscrutable.