Climbing up the steep and narrow staircase to the hidden apartment is when it hits me: Anne Frank lived here; this is where she spent two years, secluded, waiting for the war to end. Anne, along with seven other people, inhabited this secret annex from 1942 to 1944. Located in the Jordaan neighborhood in Amsterdam, the house was made into a museum in 1960 to continue telling Anne’s story.

As you walk through the museum, you weave in and out of the rooms and gradually arrive in the hidden apartment. Each room contains quotes from Anne’s journal. Their days were spent in constant fear they’d be discovered. They walked softly so their footsteps wouldn’t create noise, and they couldn’t use plumbing during the day. Their windows were shrouded in black curtains.

But through it all Anne kept her diary, the one place she could express her feelings. Her room was decorated with pictures of celebrities and landscapes as her way of bringing the outside world in. Her parents kept a tally of Anne’s and her sister Margot’s growth on the wall, and you can stand beside the pencil marks.

No one knows who gave them away, but in 1944 the Frank’s secret annex was discovered and they were sent away to concentration camps, along with the people who helped them. Of the eight hidden people, only one came back alive: Anne’s father, Otto Frank. Anne’s diary was miraculously saved, and Otto made it his goal to publish it.

One of the last rooms features a black-and-white photograph of Otto Frank in the attic, leaning against a wooden beam with light from a window highlighting his frame, illustrating his sadness at being the only survivor. I grew up reading Anne Frank’s diary and never dreamed I would visit her hiding place. Being in the house where Anne lived stirred up many emotions: all at once I was back in my childhood, reading her diary for the first time. Anne’s diary has given hope to countless generations of children and has been translated into over forty languages. – Laura Hernandez 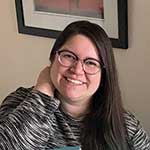