by
WLT and Elizabeth Novickas

Q: Translating humor across cultures is particularly challenging. What difficulties did you confront while translating these essays and how did you resolve them?

A: Lithuanian, like most languages, has a number of lovely onomatopoeic words. In some cases, I used a slightly untraditional translation in order to emphasize the sound qualities. For example, my dictionary translates the wonderful word šleptelėti as “flop down,” not bad in itself, but I chose to use “plop” instead. Brūzgynas, “a place overgrown with bushes and trees,” was another challenge: “thickets” gets the meaning, but one wishes for more of the entanglement implied in a multisyllable word with its long “u” and the long “e” sound of the Lithuanian “y.”

Q: The New York Times quotes Myrsini Gana, saying, “I feel that when the translator is laughing, the humor will manage to get across.” What in Žydrūnas Drungilas’s writing made you laugh?

A: It’s the unexpected connections between things. I have the pleasure of knowing Žydrūnas personally, and this was characteristic of his conversation, too: everyone would be discussing some subject, and Žydrūnas would pipe up with something that would first make your head spin, wondering where that came from, and then make you laugh when you got it. You sometimes get the feeling his brain is in some other stratosphere.

Q: Is it possible to fully convey the humor in the original, or are some things simply lost in translation?

A: Lithuanian uses the formal and informal forms of “you,” a subtlety in social interactions impossible to convey easily in English. For example, when the condo association president quite intimately assaults the narrator in “The Blockage,” she continues using the formal form to say: “You didn’t answer my question.” The contrast between her action and her language is, unfortunately, lost. 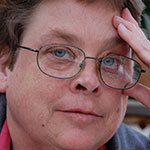 Elizabeth Novickas worked in a number of fields before returning to her first love, literature. Her translation of Giedra Radvilavičiūtė’s essays  (see page 73) was published in 2013 by Dalkey Archive Press.