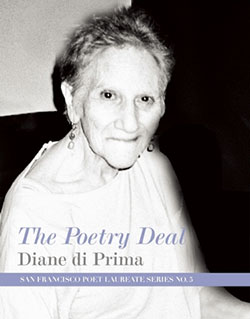 Still writing “on this earthquake fault” in San Francisco, feminist Beat poet Diane di Prima continues to create her revolutionary verse. At eighty, aged out of the thirty-under-thirty and forty-under-forty lists and writing from Silicon Valley—and where else is youth so brutally and uncritically worshipped?—di Prima’s concluding poem in her just-released The Poetry Deal is entitled “OLD AGE: The Dilemma.”

Perhaps this is yet another of San Francisco’s striking contradictions: a city whose tech industry quickly casts workers aside celebrates those poets who have been calling the city, and the world, to social justice since before the dot-com bubble. The Poetry Deal is City Lights Publishing’s fifth in its San Francisco poet laureate series. Di Prima follows Lawrence Ferlinghetti, Janice Mirikitani, devorah major, and Jack Hirschman. Like her predecessors, di Prima’s concerns transcend her own condition and do the broader work of poetry, which “constantly renews our seeing: so we can speak the constantly changing Truth.”

In “Some Words about the Poem,” di Prima writes, “Poetry holds paradox without striving to solve anything.” This collection, which contains both previously published and new poems, illustrates that paradox: our deepest desires for social justice appear on the page alongside our individual and collective failures with few easy, practical solutions. And perhaps San Francisco is, more than any other US city, the best canvas upon which to illustrate our most bedeviling paradoxes (which Rebecca Solnit also describes so well in Infinite City: A San Francisco Atlas).

Diane di Prima has been working from this fault line for more than four decades, and she’s not finished. Neither naïve nor jaded, di Prima continues to write what she sees and to encourage our attention.