In August 1967 Raeber passed through New York on his way to Oberlin College—where he was poet in residence while his translator, Stuart Friebert, was in Europe on sabbatical leave. During the academic year 1967–68, Raeber spent all his vacations and some weekends in New York as a guest in the house of Christiane Zimmer (1902–87), daughter of the poet Hugo von Hofmannsthal. Together with her family, she had escaped from Nazi persecution and lived on Commerce Street, Manhattan, in a small brownstone house. Her hospitality had made it a center for German postwar literature, and Max Frisch and Hans Magnus Enzensberger were among her guests.

Raeber began writing poetry as a schoolboy, publishing poems since 1950. His volumes The Transferred Ships (1957), Poems (1961), and River Bank (1963) won him recognition as an emerging voice in German poetry. But from the late 1950s onward, he began to experiment with forms of prose and was deeply hurt by harsh criticism after a reading at a “Gruppe 47” meeting in 1959. It was during his visits to Manhattan from Oberlin that he managed to write the first draft of his novel Alexius under the Staircase—and this breakthrough opened the way to his later prose works. He always said he owed this success to the city of New York and especially—as he loved writing in coffeehouses—to the atmosphere of Café Figaro on McDougal Street, his favorite haunt.

Raeber returned to New York and Christiane Zimmer’s hospitality several times after his stay at Oberlin. After writing more prose, he took up writing poetry in 1977 again after a pause of ten years and published the volume Reductions in 1981. During a long visit in January 1982, he started the first draft of his poems about New York. Here we can see a new development: he began using the language of his Swiss childhood, “Luzerner Alemannisch,” for the composition of poetry. So there are two poems with numbered parts or stanzas, one in standard German using the standard name of the city “New York” and one called “Neu York,” as the city is referred to by the people of his Swiss home. In both poems, each of the stanzas has a separate topic, but the parts always belong to the composition as a whole and should be read together. Raeber grew up in an atmosphere of ardent Catholic faith. After a deep spiritual crisis as a student, he lost his faith, but the images of his religious youth never left him. They were instead transformed into metaphors that blend Christian imagery with a broader mythical tradition to celebrate the power of poetic creation.

The standard German poem “New York,” with its six parts, sings the praise of “the shining demon” that is, in Raeber’s own words in his Alexius novel, “the only city, the eternal Jerusalem-Babylon-Byzantium-Venice-Manhattan” where all the symbols of past cultures lie stacked as in a palimpsest to be discovered by the meandering voice of the poem. In a constant rhythmic movement back and forth parading like pilgrims in a procession leading uptown and downtown, all the rich layers of the city’s significance will become present. 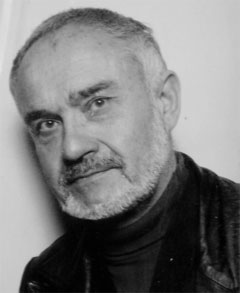 So, fifteen years after experiencing “the shining demon” of New York that had promoted and encouraged the development of his literary work, Kuno Raeber summarized what the city had come to mean for him in these poems, and he presents his readers with the latest forms of his poetry. The volume Abgewandt, zugewandt(1985; Turned away, turned toward), in which the poems were printed, was the last in his long career as a poet. The following poem is written in standard German; the Swiss German version then follows.

What sort of flowers what
leaves thrown away the stem
black and stamped out
the cypress
over the trees and over
pylons the
pyramid.
Or the desert crystallized
gleaming polished oath
of death sorcer-
ess gesture against the empty
sky elevated without
solace without tears
house of cards always
more confounded always
built higher collap-
sing and torn
down and tirelessly
begun again between both
rivers of Paradise con-
cocted of a thousand
sounds. Said to be dead there
lies the hairy
giant still
just look in the grass and holds the
conch to his ear listening
and laughing.

Skyscrapers as new
bodies for
Venetian senators torn
down in the construction and
endlessly erected
the processions
of scarabs
of pharaohs their skin
scaly and motley
in the thicket the temple
alone in the clearing
processions
and the sacrifice on the bloody
altar blotted out
overgrown and the avenues iced over
the trees black without leaves
processions
coming from everywhere
nowhere
a grave housing with a
plant a bone
a torn-off shred
of holy linen.

Sucking
slowly earnestly
sucking cease-
lessly sucking without
ever tiring with all one’s
soul sucking just
sucking
all sucked all
sucked close nearer
and nearer
sucked and
nearer and nearer
in and sucked
full and
fuller and fuller
sucked sucked
deeper inside
and deeper inside always
deeper inside sucked and
deeper and deeper
inside and sucked
out and always
more and more sucked out all
sucked out empty
sucked down to the dregs.

Hides hanging
from the walls
hides peeled
off stripped
off hides
everywhere down from
all the walls
hanging hides of
blood and flesh of bones
freed tidy
rinsed hides
on nails on clean
washed heads
of nails hides
hanging down
from the proper walls
the nails cleansed and scrubbed
of all the filth
from the shining heads of the nails
the hanging hides
neatly distributed across
the painfully washed
walls.

Translation from the German
By Stuart Friebert

And then you’ll arrive and all is
the same as here here
is there and there is
here. Only the air the air
there is lighter and
the houses are
higher and the people
faster and still notice
other things they are
all sad
because they are already there: where
else could they go to?

Have you seen the dark
yards the black
sacks way down below and above
the glassy towers
one next to the other? They’ll take
they’ll lift you up
they’ll lift you higher no
fear of falling down way up
they’ll pass you on from one
to the next and already
you’ll be in heaven.

Alexius at the Empire State

Don’t shove forward
and just stay
at the tail of the queue
like this you’ll get
to the front early enough and suddenly
you’ll stand in front and must
go up then you must go up
all the stairs then you must
go up step by step
climb one after the other
and there is
nobody at all in front of you you can’t
turn back can’t
get down any more you are
alone up there you are
all alone on top they’ve got you
you can’t turn back they’ll
take you they’ll hold you.

And then I was overcome with fear and I
thought everything is
the same as ever it is
all the same as always and it is
all quite different everything’s
there that was always there the sky-
scrapers and the subway
and also the smell yes
above all the odd
smell coming up from all
the tunnels out from all
the houses and when you’re
inside the houses from the
street through the windows
coming in the smell the
odd smell as from strange from
long-withered strange
flowers the odd the sweetish
smell that is also still the same and
it is different everything
is quite different the
shaky colorful little houses in between the
the skyscrapers and the crazy
Tuscan villa on top of the
little old skyscraper in the Village
all all is the same and the
smell the odd and sweetish
smell coming up from the tunnels and out of the
houses and through all the
windows into the houses
it is the same as it
always was and is
quite different everything
quite different and I
was afraid
that I might be no longer
the same and that I might suddenly
be someone else a
gruesome fear.

Translation from the Swiss German
By Christiane Wyrwa

Editorial note: From Band I: Lyrik, in Werke in 7 Bänden (Munich: Nagel & Kimche, 2002). Special thanks to Carl Hanser Verlag (Munich) for permission to publish these translations.

Christiane Wyrwa studied German and English literature at Göttingen, Durham GB, and Berlin, where she took a PhD in 1981. With her husband, Matthias Klein, she edited Kuno Raeber’s Collected Works in seven volumes from 2002 to 2010.