by
Misrak Terefe
translated by
Eric Ellingsen and Jorga Mesfin 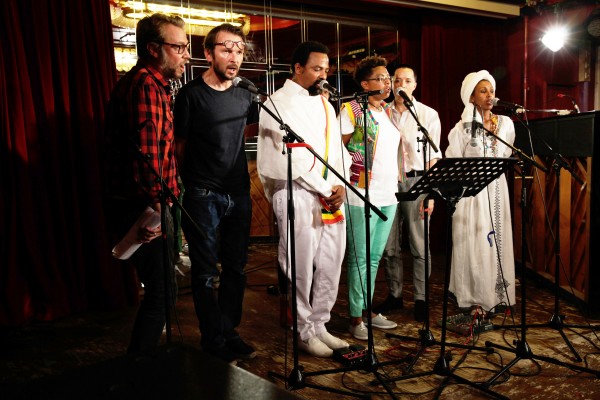 This says the meaning of country is sitting in the balance.
In order to say, to be able to see,
the balance, the leader must see
the country from the people’s side.
From the people’s side when truth shines on the meaning of country
country means mother, and from the mother’s body soul is born.
Therefore taking something from the country is taking the mother’s flesh.
From the leader’s side the leader calculates the meaning of country,
country means wife, and wife means having a love without opponents
without competition.
Therefore
Stand in the shoes of the people. You are looking up to the leader. He’s sitting on your
mother’s shoulders.
Get off of my mother, you are saying. Your mother’s my wife, the leader is saying.
This is the protest when seen from the side of the people.
This is the protest when seen from the side of the leader.
This is the protest when heard by the ears of power.
This is a designated place for the people.
This can only mean you are kidnapping my wife.
This is the people asking, Should we be accused?
This is the people saying, Shouldn’t we be by justice imprisoned? Isn’t death too small a sentence
for this transgression?
This is the people saying, Don’t tell the leader to step down by distorting the meaning
of country.
This is saying without being on the side of the leader, how can you judge him?
This asks the people, Would you give away your own maid let alone your own wife?
What! the leader says, Today’s wife is a twisted and fickle gold digger!
Once she gets what she wants she leaves you.
See the husband embracing his wife at she winks at another man across the room!
See the wife’s eyes making business with someone else!
See what it feels like to still care for a wife like this, to feel protective when
with their eyes they felt her.
Many times, this says, you have picked fights and drawn swords to protect her.
This says a leader would never divorce his wife unless she dies.
This says a wife is a leader’s daily throne, his everlasting inheritance.
This says, people, because you gazed at his wife’s thighs, the leader is eaten up
by jealousy.
If on your bold heart bullets are counted,
whose fault is this?
The side of the people says, let me be serenaded by mother’s love.
Let me be carried in my mother’s wraps.
Let me inhale my mother’s odor.
Let me feed on my mother’s breasts.
This asks how many lost their lives wishing closeness to their mother, ending entering
mother earth?
In the King’s court the translation is distorted. The true meaning of country is truth.
This says: My country, my mother, before you are injured, let me be sacrificed!
People, this is your poem. This is your war cry. This is the war chant.
When this cry is sealed in this envelope and mailed to the palace,
on the majesty of the leader’s throne, when he sees and opens the poem,
this petition written while standing in the shoes of the people,
this has now found the king’s court.
This says, Does this country ever speak?
This can only say, People, you have been bold
insulting your leader, asking “Share your wife with me.”
This is asking, How about this crime of asking, shouldn’t you be exiled?
This is the poet asking, If for your life a life sentence is the verdict?
Therefore to the people looking, in a leader’s eyes
the meaning of country used to be seen as mother.
This says the people say, The meaning of country is too heavy for you, let me help
you carry her. This is asking if this is said with a self-righteous heart . . .
This says the people say to the leader, Your brother’s face wouldn’t be darkened and
in suspicion, jealousy of your mother would not possess you, if
you didn’t confuse the meaning of country.
This looks to ask, Why do you think this meandering people is tried by fire? In asking
for a mother
do they not see they are asking to borrow the wife?

This looks to ask, if the leader had seen the meaning of country . . . as mother,
would he
see the people as brother?
Oh my people, let the situation be seen from the leader’s side.
Oh you people, you tighten the reigns of your mother.
Oh you people, I will not let my wife go because she’s desired by another.
In the world of men and the philosophy of husbands, jealousy of a wife looks like love.
And what does love look like when love is ripped from a husband’s hands?
What does your anger look like when left alone,
when your love is picked up by another?
Oh my leader, let the situation be seen from the people’s side.
In the past, when you were still the people, your mother’s face darkened
at the hard work. The empty purse. How the wrap worn where money is tucked
is emptied while working, folded in hunger pains. Before, when the leader was one
of the people, the country was a mother. Today a wife exposed, bare, naked, shamed.
Today reminding.
This asks, How is the country’s beauty?
How is her breath?
How is her warmth?
How are her thighs? Her calves? Her legs?
Today’s young bride, yesterday’s revered old lady.
And again. And again. And again
this says, Exit and enter – too many trumpets in your comings and goings.
Today guards carry arms in their belts.
Today thousands of uniformed guards guarding by pouring into the streets.
Today forgetting I am your relation, your brother, your flesh.
Today I can find you on the street and say hello to you and peace.
Today when you pass me by, the guards make me turn my greeting to the wall, turn
my back
to the leader, and so I say, Peace to the wall, I greet you.
Today being grouped as too ordinary, unfit to face the leader passing by. A weakness
of strength, to be made insignificant.
Unless you are the people, you never feel this feeling.
Had the mirror of power not reversed
the image, the meaning confused,
then for the leader and the people, country would be the same.
Country means meaning, meaning means changing, unless changing uniforms,
changing fields.
Changing is the answer to the riddle.
For the leader there is anxiety; for the people anxiety is agony.
This says the meaning of country is sitting in the balance.
This says one has to be able to see on the side of the leader and the people.
Therefore people, Oh people, let this situation be seen
from the eyes of the leader.
Oh leader, please look at this situation
from the eyes of the people.

Translation from the Amharic
By Eric Ellingsen with Jorga Mesfin 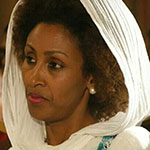 Misrak Terefe is a renowned poet in Ethiopia who published the first poetry VCD as a female poet. A founding member of the Tobiya Poetic Jazz Group, she has various joint publications with other writers as well as the Tobiya poetry and jazz DVD (vol. 1) release.

Eric Ellingsen is assistant professor of landscape architecture at Washington University in St. Louis, Missouri, and a member of Poetry-Jazz.

An Ethiopian musician, Jorga Mesfin is the founder of the Ethio-jazz group Wudasse and composed the score to Haile Gerima’s epic movie Teza, for which he won the award for Best Music Selection at the twenty-second Carthage Film Festival and Best Composer Award at the fifth Dubai International Film Festival.