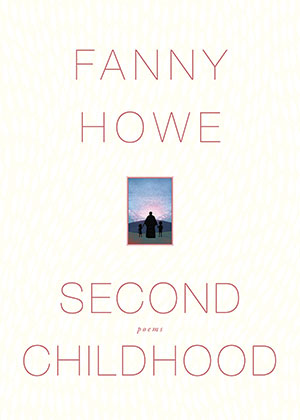 How much of a poet’s biography can be read into (or behind) a book of poems? In the case of Fanny Howe’s latest collection, Second Childhood, the temptation to project a life onto the page is irresistible, but the author herself cautions against such a reading. In a recent interview, Howe admitted: “The ‘I’ in my poems is a stranger to me, someone ‘sent forth’ like a character in a novel to explore the bizarre nature of being, to touch and feel surfaces, to wander as a child does, invisible, without power” (nationalbook.org). Nevertheless, human empathy tantalizes us to unearth the archaeological self beneath the lyric “I” in poetry, and Howe’s poems invite readers to imagine the author as a child wandering through her work.

As Howe’s own “strangeness” to herself suggests, prior to the disconnect between poet and persona is the disconnect between the various selves that make up a life, despite the seeming coherence implied by the single name on a book’s title page. “You’re like someone crossing a border daily,” Howe writes, “a person who is to itself unknown” (“Between Delays”). Under the rubric of a title like Second Childhood, the reader might wonder what sort of return such a rebirth or rejuvenation entails, especially when the repeated impulse is to “stop becoming an adult,” to shed the weight of “luggage from the twentieth century.” Yet for the speakers in Howe’s poems, the apparent chasm between childhood and adulthood implies that those gardens of innocence will never be fully recaptured: “I’ve lost my child at the bend where we parted. / We will never come back to that hour” (“The Monk and Her Seaside Dreams”).

One recourse to the straitjacket of mortality is belief in the metaphysical, and several of Howe’s poems imagine “postulants” or “penitents” who might gain access to arcs of transcendence. In A God in the House: Poets Talk about Faith (2012), Howe speaks candidly to Ilya Kaminsky and Katherine Towler about her Catholic faith, reading Hildegard von Bingen and Simone Weil, coming to terms with “structural evil” in the world, her belief in “a God behind God,” and her “hope that there is meaning in the end.” In the context of her poetry, however, when too many gods crowd around the seeker, the author imagines using a “broom, rosary or cane” to shoo them away.

Between the bookends of childhood and the promise of “meaning in the end,” the work of the poem seeks delight in seeing through what Howe calls “gauze of a crystal kind, another kind of web of a type that doesn’t harden but swings and shimmers” (“Second Childhood”). Coming from a writer peering with wonder and defiance into the crepuscule of life, it’s a delight that readers should savor.

Editorial note: Howe’s Second Childhood was one of two Graywolf Press finalists for the 2014 National Book Awards in poetry, along with Claudia Rankine’s Citizen: An American Lyric. Given how many Graywolf poets have won major national and international awards in recent years—including D. A. Powell, Vijay Seshadri, Tracy K. Smith, Mary Szybist, and Tomas Tranströmer—the press’s indispensable presence in the world of contemporary poetry cannot be underestimated.