Channeling the Other: A Review of Echoes of Tattered Tongues, by John Guzlowski 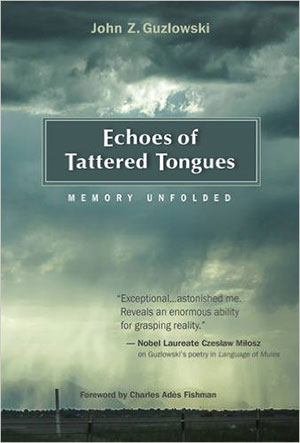 Like most immigrant kids, John Guzlowski never wanted to write about his Polish parents and the world they left when they came to America. They had been slave laborers during World War II, while he, born in a refugee camp after the war, was an American with his eyes set on intellectual and artistic pursuits. His parents hardly spoke English; he became a professor and poet. The rift between him and his parents was only deepened by how their American neighbors viewed them. “I felt hobbled by being a Polack,” Guzlowski writes, “and a DP, a Displaced Person. It was hard karma.” When he told his parents, “Your world is not my world,” he meant it.

Unlike most stories of this kind, however, Guzlowski’s is told mostly in poems, which forces the author to wield formal control over a material that’s painful and distressing. Luckily for us, in Echoes of Tattered Tongues: Memory Unfolded (Aquila Polonica, 2016), Guzlowski writes taut poems—he cares about the narrative as much as the voice or the image. For instance, in the poem anchoring the first of the book’s three distinct sections (referred to as “Books”), entitled “Souls Migrating in the Rain,” Guzlowski employs a metaphor to write about the souls of his parents departing: “Like the sea / On a moonless night / Growing away from me, // Its waves moving first towards me / And then away, toward me / and then away.” These beautifully realized lines not only showcase Guzlowski’s poetic sensibility but also keep the poem from slipping into sentimentality.

In order to fully understand what they went through, and why they were so different from the parents of his peers, including other Polish immigrants in Chicago, Guzlowski had to first unpack their pain, fear, anger, and hopes.

Guzlowski’s parents, traumatized by their experiences in concentration and slave labor camps, “wanted so hard to give us happiness,” the author writes. But in order to fully understand what they went through, and why they were so different from the parents of his peers, including other Polish immigrants in Chicago, he had to first unpack their pain, fear, anger, and hopes. When his mother was giving birth to him in a camp, she “kept screaming until the flood came and my bones poured from her flesh like tomatoes exploding in the hands of a dirty God who didn’t care about what she remembered or feared or wept over.” His father, on his first day in America, “asked the blessed world before him / in a Polish it would never understand, / ‘Why did they do it, drag us off, / kill us, and keep us chained for so long?’” By telling and retelling their story—“When I was a kid, / I sat among / The broken bones / And sorted them / into piles”—Guzlowski pays homage to a history that has always been his as well.

Channeling the voices of the Other, near and far, Guzlowski aims to write not only about his parents’ lives “but also about the lives of all those forgotten, voiceless refugees, DPs, and survivors that the last century produced, no matter where they came from.” In doing so, he appeals to our shared desire to understand how the present continues to be shaped by the past. 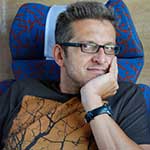 Piotr Florczyk is the author of East & West, a volume of poems; Barefoot, a chapbook of poems; as well as Los Angeles Sketchbook, a collection of brief essays and photographs. He has also translated several books of Polish poetry. Piotr and his wife, Dena, live in Los Angeles, where he is a doctoral student at USC.