In the aftermath of COP26, it is easy to see we will most likely fail to limit global warming to 1.5℃, or even a catastrophic 2℃, yet we continue to live as though we will somehow avert the consequences. Thomas L. Friedman, writing for the New York Times in November 2021, still claims that we have tools “that are as big and powerful as Mother Nature—Father Profit and New Tech” to set us back on the right track. Others assure us that we can adapt to rising sea levels, drought, crop failures, disease, wildfires, and increasingly powerful storms by building higher seawalls, cloud seeding, and other experimental technological fixes, all while maintaining the lifestyles to which we are accustomed, under the paradigm of continual economic growth. This is the disheartening, passive hope we are meant to hold onto, requiring nothing more from us than to be good consumers and cast the right vote. Meanwhile, in parts of the world often overlooked by the Western media, people are struggling to survive famine, war, and other calamities linked to the drastically changing climate. We look away, but it may not be long before many more of us are trapped in similar circumstances. 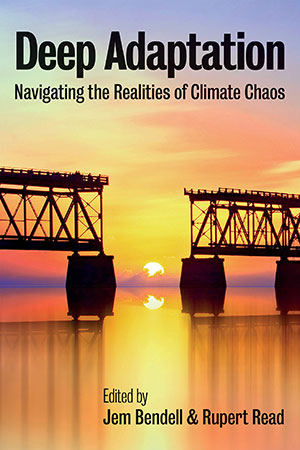 In 2018 an academic paper titled “Deep Adaptation: A Map for Navigating Climate Tragedy,” by sustainability professor Jem Bendell, considered this scenario. The paper suggested that humanity needs to prepare for near-term societal collapse, by which Bendell means “an uneven ending of industrial consumer modes of sustenance, shelter, health, security, pleasure, identity and meaning” due to climate change. The paper went viral, downloaded more than a million times since its publication, and is now the basis of a multi-authored book edited by Jem Bendell and Rupert Read titled Deep Adaptation: Navigating the Realities of Climate Chaos (Polity Press, 2021).

The premise of the book is that the impending breakdown of industrial consumer societies is now “potential, probable or inevitable” and should not be ignored out of fear. The various authors take different stances on the likelihood of societal collapse, but their differences do not preclude them from discussing the implications and challenging readers to rethink what is most important to them, and what can be done to protect what they most value. Unlike the growing prepper movement that prioritizes personal survival at all costs, Deep Adaptation calls for adaptive responses that spring from solidarity with all life, which requires an expanded sense of self and kinship.

The word deep is chosen to contrast with mainstream adaptation to climate impacts and calls to examine the fundamental reasons why we landed in this mess. In the book, climate change is seen as a symptom of a deeper malaise that requires a search for new, transformative ways to live within planetary limits. The authors share a view that the cause of our current predicament is found within foundations of our modern culture, which perpetuates the illusion that humans are separate from one another and nature, and thus an adaptive response demands a major cultural shift. For example, in one chapter of the book, a collective of decolonial scholars argue for a shift in perception of ourselves from autonomous individuals to being enmeshed in a wider, living bio-intelligent metabolism.

The premise of the book is that the impending breakdown of industrial consumer societies is now “potential, probable or inevitable” and should not be ignored out of fear.

Deep Adaptation does not offer any ready measures for making this shift; in fact, it warns against dogmatic solutions, instead offering a set of questions known as the “Four Rs”—a framework for making sense of the unfolding climate tragedy and reconsidering our values and our relationship with the natural world.

Resilience asks us “How do we keep what we really want to keep?” Relinquishment asks us “What do we need to let go of in order to not make matters worse?” Restoration asks us “What can we bring back to help us with the coming difficulties and tragedies?” Reconciliation asks “With what and with whom can we make peace as we face our mutual mortality?”

These questions are introduced in the first part of the book, which presents the case for anticipating societal collapse and examines our reticence to consider it. Other chapters deal with the implications of the likely breakdown and how the Deep Adaptation framework may be applied to leadership, education, psychology, spirituality, and relocalization of the economy.

Deep Adaptation offers a framework for making sense of the unfolding climate tragedy and reconsidering our values and our relationship with the natural world.

The authors acknowledge that anticipation of societal collapse is still taboo, usually met with the criticism of being alarmist, pessimistic, defeatist, and fatalistic. They believe these flippant dismissals discourage engagement and waste precious time that could be given to exploring “what can be done and learned at this difficult moment, especially if our aim is to reduce harm while saving more of society and the natural world.”

In summary, Deep Adaptation is an invitation to consider the hardships quite possibly in store for humanity, and to avoid the incongruity of going back to business as usual. Rather than being defeatist, the message can inspire the defeated to meaningful action, though the authors’ message might be better received without the trappings of an academic style that suggests an audience of policymakers rather than the general public. This uncertainty of the intended audience is perhaps the book’s biggest flaw, but its message of radical hope—that we can find meaning and a way forward in the face of catastrophe—is one worth spreading. 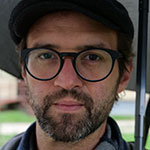 Joel Mowdy is a writer and educator from New York living in Lithuania. He is the author of the story collection Floyd Harbor, published by Catapult.